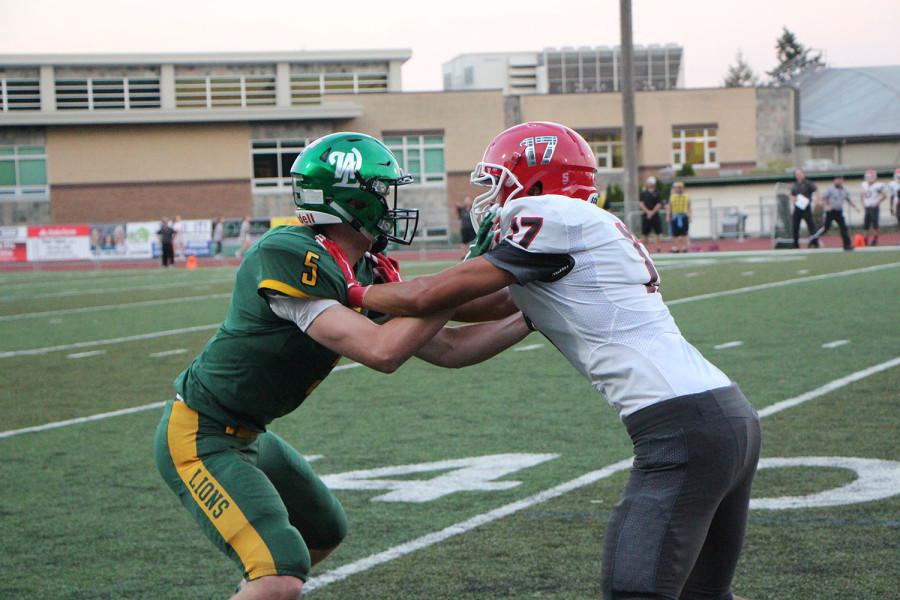 Wide Reciever Cody Coppedge, senior, lines up against David Douglas defender in the 49-14 win over the Scots. The Lions play Friday at Lake Oswego at 7:00 p.m.

With running back Elijah Molden, junior, sitting out due to a head injury sustained against Oregon City, Khalil Monson, senior, picked up the running game with nine carries for 66 yards. However it was the passing game that led the Lions in a dominating first half.

Quarterback Tim Tawa, junior, threw for over 200 yards and five touchdowns in the first two quarters, giving the Lions a 42-0 lead at the end of the half. Tawa connected with wide receiver Connor Berggren for three touchdowns, Cody Coppedge, senior, for one, and Jake Meisen, junior for another.

Not only did the Lions offense shine, but the defense was able to shut out the Scots defense in the first half and force turnovers. Cornerback Qawi Ntsasa, sophomore, recovered a fumble by the Scot’s quarterback, returning it 22 yards for a touchdown.

As the league opener against Lake Oswego approaches, the Lions are ready to build on this momentum as they head into a tough league slate of games.

“We are just preparing for league like any other game. Just playing one game a time, and working to win.” Ntsasa said. “This is all just as we are moving towards our ultimate goal of state.”

Even the fans are looking forward to the rest of the season, as the student section was overflowing in green and American gear.

“I was extremely impressed with the turnout especially from the freshman class. It is cool to see everyone joining the Lion pride.”  Spirit Squad leader Sarah McKay, senior, said.