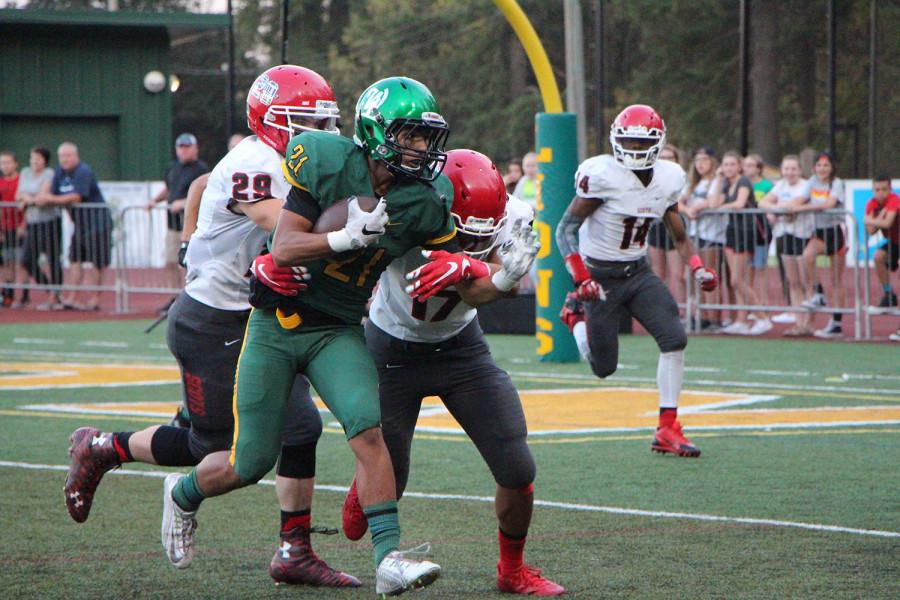 Wide out Qawi Ntsasa, sophomore, receives a catch near the endzone during the David Douglas game. West Linn won 49-14 with help from Connor Berggren, senior, who scored 3 touchdowns.

“I think our defense is going to do great this year. We didn’t perform to our fullest potential against Oregon City,” Chitty said. “A lot of our mistakes came through problems with our technique.”

However, Chitty said that these problems such as tackling shouldn’t be much of a problem against David Douglas, which rang true as West Linn beat them 49-14.

Over the summer, the Lions bonded closely, according to wide receiver Connor Berggren, senior, which has a positive effect on their overall performance.

“We are all extremely close. We were with eachother almost everyday this summer, whether it was practice or just hanging out,” Berggren said.

Although cornerback/running back Elijah Molden, junior, is recovering well from his head trauma during the Oregon City game, he didn’t play against David Douglas.

West Linn is now preparing for their first league game against Lake Oswego this Friday.

“We have to make sure we don’t get complacent and we need to play at the level we know we can,” Qawi Ntsasa, sophomore corner, said. The matchup against the Lakers will take place at Lake Oswego High School, Friday, sept. 18, at 7:00 p.m.