An alternative sport for fall and spring seasons. 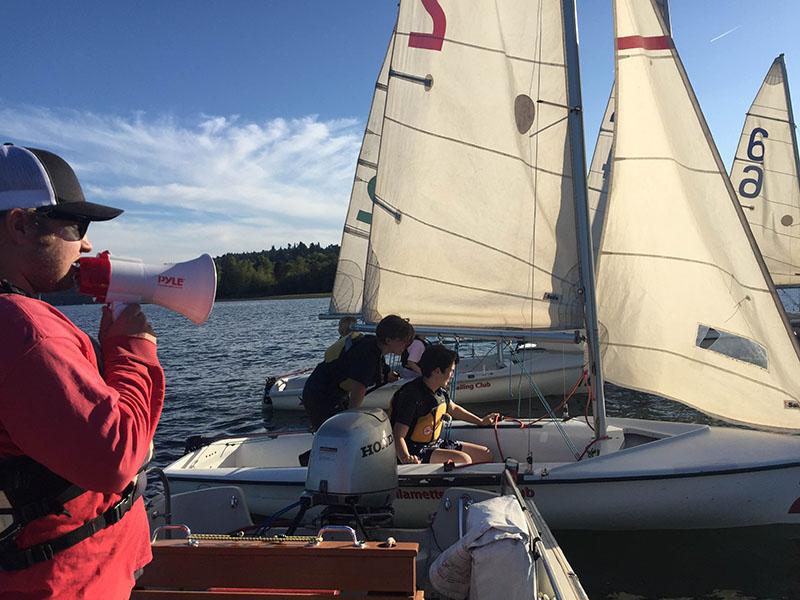 Peter Rummel, one of the two head coaches, directs practice race starts from the power boat. When it’s Rummel’s days to teach, the team practices racing. “Everyone was over the line, but that was much better!” he said through the megaphone.

The Willamette Sailing Club, or WSC, in downtown Portland offers an alternative activity for fall and spring sport seasons. Sailing is one of the older, and traditional sports around the world.

There are multiple options, as far as the type of boats that are used to practice and compete in. High school sailors use Club 420s, FJs, and Lasers. Both the 420s and FJs have two sails; a larger one and a smaller one, and are both double handed. This means steering while the other person balances the boat and controls the smaller sail. The Laser is a single handed boat with one sail, and are for more independent competitors.

Anyone, ninth through twelfth grade, can join the team and be a WSC youth member. The team has 53 students and hosts almost 20 different high schools around the Portland area.

“It’s very friendly and full of all types of people,” Peter Rummel head coach, said. Due to the plethora of students, the team is split in half for different practice days. Although they are split up, the whole team’s main goal is to go from city level, to regional, then national.

Sailing competitions are called regattas, much like rowing. Sailors that represent clubs around the  Northwest, compete in an all day series of races on weekends. Regattas can range from one to two days, depending on the event.

“Sailing is more than just a sport,” Anisha Arcott, sophomore said. “It’s a community and a life style. It’s an activity where I can get out of the classroom and learn while getting active and having fun.”

There are also plenty of options for parents to become involved. Every practice requires a “shore parent” to bring snacks and stay on the dock in case of an emergency. Shore parents are established by email, or during the before-season parent meeting.

“It’s not just going for a sailboat ride, it’s can be a very physical sport,” Rummel said. “It’s important to have mental toughness and be willing to practice two to eight hours a week.”

All practices are to be attended, and if one is missed, it is expected that you make it up. The team communicates through Teamsnap, an online way to mark attendance and inform the group about upcoming events.

The next session starts in spring of 2016. All information and contacts can be found on the Willamette Sailing Club website, http://willamettesailingclub.com.