Steph Curry sets NBA record for most points scored in overtime for a comeback victory in game four against the Portland Trail Blazers. 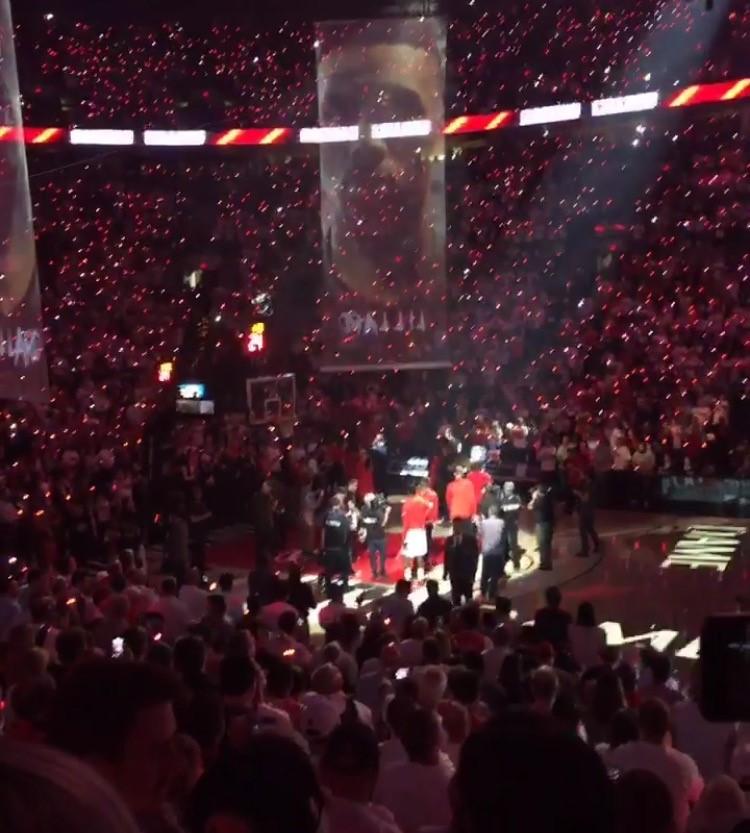 During game four of the series against the Golden State Warriors, Portland Trail Blazers’ guard Damian Lillard is introduced before the game. Last night, the Blazers’ lost to the Warriors by a score of 132-125. They will play game five of the playoff series on Wednesday, May 11th.

The Portland Trail Blazers have been defying all odds and proving their critics wrong all season. As a team that lost four of their five starters going into this season, no one expected much of them as a team; but the Blazers’ never got the memo. They have become the first team in NBA history to make the playoffs while losing all but one starter on their team. Going into their first series against the Los Angeles Clippers, everyone said they would get swept. The Blazers’ won in six games. Now, currently playing through what is the biggest challenge of the season against the best team and the best player in the NBA, the Blazers are showing that they are not finished despite being down 3-1.

Arguably the most important game in any series of the NBA playoffs is game four, and last night was no exception. The storyline going into the game were as talked about as any other topic in the sports world at this time. The best player in all of basketball, Steph Curry, would be coming off the bench in his first game back from injury. The youngest team in basketball, The Portland Trail Blazers, were supposed to be swept by the best team in the NBA but are now going to try to tie the series up 2-2 at home.

The atmosphere was electric as the game tipped off. The Blazers’ came out to an early 16-2 lead with Golden State shooting only eight percent throughout the first four minutes. After the Warriors made a couple of shots to pull closer to the lead, things between the two teams began to get heated. Golden State forward Draymond Green shoved Gerald Henderson and got assessed a technical foul. After some more complaining to the refs, the Warriors’ called a timeout to attempt to collect themselves while still being down by 10. With the crowd on their feet daring Green to lash out again, Sean Livingston thought he got fouled on a shot. With no call, the Golden State guard ran up the court and let the ref hear what he had to say. After being assessed with a technical he had a few more choice words this time to say top the ref which resulted in his ejection. With the crowd on their feet waving their hands or saying goodbye in taunting fashions towards Livingston everything seemed to be going Portland’s way. Little did everyone know, Livingston getting ejected would eventually lead to the ultimate demise of the Blazers. In came Steph Curry. After a fairly evenly matched first quarter, the score was 26-18 in favor of the Blazers. With the second quarter looking early to be in favor of the Warriors, Portland ended the second quarter by scoring eight points in the last 20 seconds thanks to three pointers by Allen Crabbe and Al-Farouq Aminu, and a dunk from Mason Plumlee, the Blazers’ ended the half with a commanding 10 point lead over the Warriors, 67-57.

As the second half began, the Warriors began hitting their stride like they had been all season. After a little more than seven minutes into the third quarter, the Warriors’ had gone from being down by 10 to being down by only two. With Steph Curry beginning to click and the rest of the Warriors’ team feeding off of his energy, Blazer fans felt like they were watching a movie they had already seen many times before. By the end of the third quarter, Golden State had taken an 86-85 lead over Portland.

As all fourth quarters usually go, this one became a crucial one. Needing a victory to tie the series up, the Blazers’ needed to pull away and create separation from the Warriors; but Steph Curry had other ideas. It seemed like for every shot that Portland made, Steph Curry matched it. With 58 seconds left, the Blazers’ had a three point lead. With the victory being so close you could almost taste it, all Portland had to do was get a stop defensively and make one shot on the other end and they would be almost guaranteed the victory. Unfortunately, the team couldn’t get either. With 51 seconds left, Golden State forward Harrison Barnes made a three pointer to tie the game up at 111-111. The Blazers’ missed their shot on the other end with 21 seconds left, and the Warriors’ had the ball with 21 seconds left After holding the ball to take time off the clock, Steph Curry put up a shot with three seconds left that just barely missed, and following the miss, Draymond Green’s offensive rebound and putback attempt missed with .5 seconds left.

Heading into overtime with the score tied at 111-111, it felt like Portland had the momentum. After winning the opening tipoff of the overtime period, the Blazers’ missed their first shot which led to a turnover. On the other end, Steph Curry made a short shot and never looked back. While shooting a perfect 5-5 including 2-2 on free throws in overtime, Curry  defeated the Blazers while setting the NBA record for most points scored in overtime with 17. Because of Curry’s 40 point performance, the Golden State takes a 3-1 series lead over Portland with the final score of game four being 132-125.

The Trail Blazers’ have had what many would call a miracle season. With losing four of their five starters going into the season, no one expected Portland to be in the position that they are in right now. They have proved their critics and doubters wrong all season long and intend to do so until the very end. For a young team, this season is the ultimate learning experience that can be used for more success as they develop into an even better team in the next couple of years. Now, down 3-1 against the NBA’s best, the Blazers’ are in a spot to just let loose and have fun. Even if they don’t win the series, they made it much farther than anyone thought they ever would. Despite the heartbreaking losses throughout the season, the Blazers’ have always come back better and stronger than before.

If one thing has been learned this season by Trail Blazer players and fans alike, a single player or team might be able to break Portland’s hearts, but no one will never break the spirit of Rip City.