Once the Claws Come Out

After a dominant victory against Tualatin the Lions football team is looking forward to a challenging game against Newberg’s QB Anthony Adams . 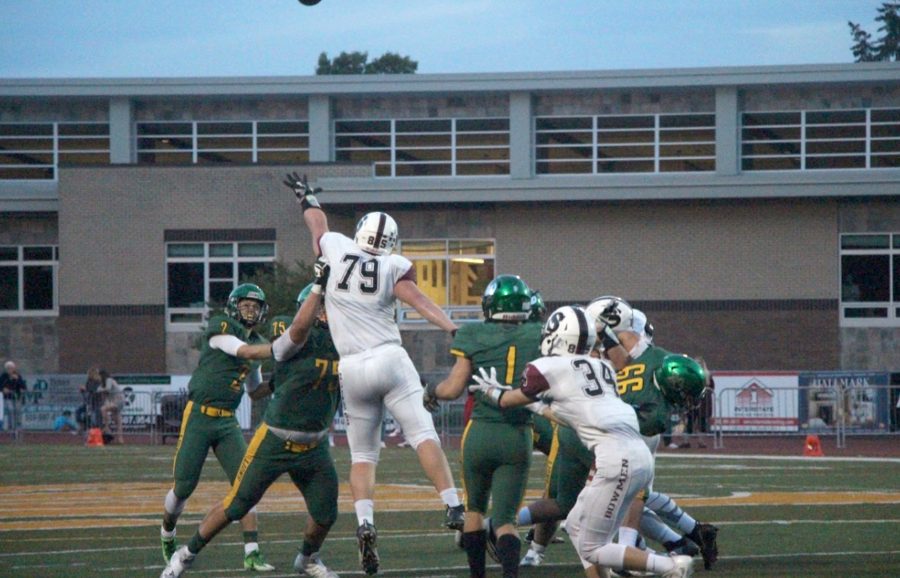 Come Friday evening when West Linn takes the field, Coach Miller will try for West Linn’s third straight win against the Newberg High School Tigers. Starting out with an impressive 4-0 record (2-0 Three Rivers League), the Lions look confident and composed as they are putting themselves in a position to compete for a state title. While they look to carry their dominant demeanor into this match up, the Tigers would like to come out of this game with their third victory after the final whistle blows.

Newberg’s 2-2 (1-1 Three Rivers League) record makes this week’s game against pivotal as they look forward to the rest of the regular season. Newberg is hoping to improve after last week’s performance, where they were blown out by the undefeated Tigard Tigers. The upcoming game against West Linn is a tough matchup that this team may have been anxiously preparing for.

In their first game of the season, the Tigers moved the ball efficiently at Barlow, scoring 56 points, earning them their first victory. Week two was a challenge in their matchup against Centennial, where Newberg allowed 41 points, losing by only one point in their home opener. Newberg’s second victory came week three with a 26-22 win against Canby; a game in which running back Conner Morris shined.

Just a short week ago, Newberg’s offense stalled against a talented Tigard team. Their defense allowed 45 points while their offense only scored three touchdowns in their 45-21 loss. Newberg fans hope their team can finally find the spark they need when they face West Linn Friday night. Moving forward from last week’s matchup will pose as a challenge for Newberg, but it will be necessary if they hope to come out and snap a two game losing streak.

West Linn’s season has been exceptional, starting with huge wins over their competition. It’s not only who they’ve beaten, but the final scores by which they’ve defeated their opponents. Week one was a blow out, defeating  Oregon City (55-27) in the 96th annual Battle of the Bridge. South Medford, the 4th ranked team in the state, was unsuccessful in moving the ball versus a veteran, explosive and skilled defense. It’s safe to say the almost six-hour road trip was worth the bus ride, as West Linn moved on to 2-0 in the regular season with a 42-21 victory.

Week three’s game was one that many were looking forward to. Would the Sherwood Bowmen avenge last year’s 51-7 loss in the state semifinal game? Could running back David Morris get outside the tackles and lead their team to their first victory of the season? No such luck. West Linn earned their third win at home with a 48-14 blowout.

Last week the Lions faced a Tualatin team searching for an identity after their coach left three weeks prior to the 2016 season, and a 50-7 score was the final result. In this week’s game against Newberg, from the first snap they will see an athletic quarterback in senior Anthony Adams. Hoping to improve on a four completion, one touchdown, two interception game a week prior against Tigard, it seems there is lack of intensity and fluency within Newberg’s offensive unit.

“Their offensive line is something we as a team are looking forward to going up against. Anthony Adams is an athletic quarterback who can make plays using his arm and his legs, so defensively we take into account his ability to scramble,” Justin Altenhofen, senior receiver for the Lions said. “I’m looking forward to facing their safety and corners both who play with speed and physicality. This week’s game is one that we have to keep our focus in, just keep our composure.”

Stopping an opposing rushing attack hasn’t proved to be an issue over West Linn’s first three games, however Morris will have something to prove. Getting in the Tigers’ backfield early and contain the rushing attack, could force Newberg’s offense to come to an early halt. After an impressive 68-yard touchdown this season while averaging over 13 yards per carry, Newberg will attempt to capitalize on defensive miscues and gain big yardage on early downs.

Come Friday evening it will come down to which team is fundamentally sound and tough minded; both teams will fight for a pivotal victory.