Despite a cold streak offensively and a late Lake Oswego rally, the Lions still manage to fend off the visiting Lakers 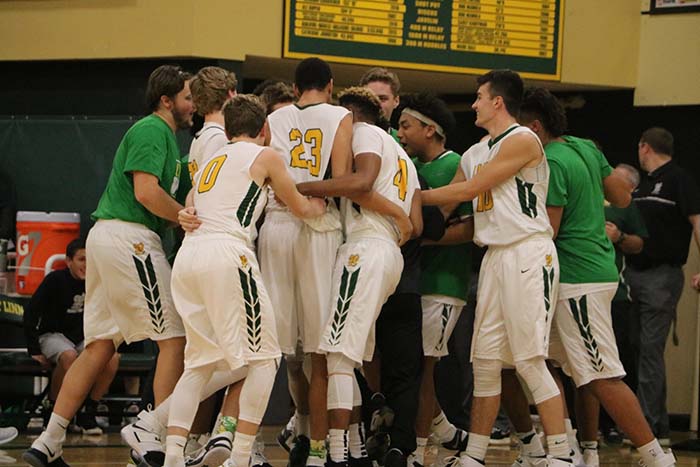 Before one of their regular season games earlier this season, the men’s basketball team comes in to break from their pregame huddle before their matchup. Following their latest win against Lake Oswego, the Lions move to 9-4 (5-0 three Rivers League) on the season and remain in control of the top spot in the Three Rivers League. The next game for the group will be on Thursday, January 26th against the Tigard Tigers at West Linn High School.

With this game being played early on a day that the players usually had practice,there was already a weird vibe to how pregame felt. To add on to that, this game was already a historic league rivalry game and both teams are attempting to fight for one of the top spots in the Three Rivers League. To top it all off though, senior guard Rodney Hounshell of West Linn had just recently moved out of Lake Oswego and into West Linn, and this would be his first time facing off against his old team. Monday night had a different atmosphere than most regular season games do, and it did not fail to live up to its hype.

The game started with an offensive explosion. Both teams hit their first shots and didn’t seem like they were going to slow down anytime soon after that, but the two defenses had some other ideas.

A few of the things West Linn is best at is their ability to create scoring opportunities in the transition game, and having second chances on offense based off of their aggressiveness on the glass and grabbing offensive rebounds. Lake Oswego wasn’t going to give them either of those. By the end of the first quarter, a majority of Lake Oswego’s points had come off of offensive rebounds that were grabbed and put back after missed shots; and for one of the first times this entire season, West Linn was getting out offensive rebounded by another team after the first quarter of play. Things really didn’t change much in the second quarter. After a small offensive explosion late for the Lions, the halftime score was 37-27 in favor of West Linn. Despite the ten point deficit, the Lions were still getting out-rebounded and had more turnovers heading into the half.

When the second half began, West Linn seemed to be given a new life on the court and almost immediately increased the deficit to a 12 point game. But Lake Oswego wouldn’t back down and cut the difference back down to six. For the rest of the third and early fourth quarter, neither team could create any real separation from each other with each of them hitting their own hot streaks at different times. With all of the ebbs and flows of the second half, the score never really differentiated from six or ten points until the final two minutes.

When the final two minutes happened though, things almost went south for the Lions. Lake Oswego went on a hot streak making three of their next three three point attempts and a two point floater while West Linn only responded with one made shot and also had two missed free throws. With the crowd getting more into it and some of the frustrations of the players on the floor increasing, the game got much more physical and both teams quickly got into foul trouble. Because of this, when Lake Oswego had to start fouling to attempt to regain control of the game following a West Linn three pointer with under a minute to go, the Lions were already in double bonuses with their free throws and could basically coast to a win. The play that put the game on ice and ended Lake Oswego’s comeback bid was a layup by senior guard Braden Olsen.

The Lions won by a final score of 72-61. They improve to 9-4 (5-0 Three Rivers League) and remain in first place in the league, while Lake Oswego drops to 7-8 (3-2 Three Rivers League) on the season. West Linn’s next game will be against the tIgard Tigers on Thursday, January 26th at West Linn High School.