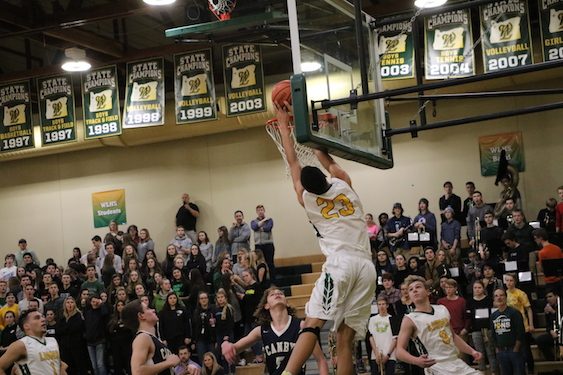 Khalid Thomas, senior forward, finishes with authority in a 88-44 win against Canby.

With almost half the season in the books, this senior-led-lineup made critical adjustments which has led them to recent success. After another home win against Lake Oswego, the Lions’ record improved to 9-4 (5-0 Three Rivers League.)

“As our team faced adversity, we came together as one and had a talk about how bad we wanted to win another state championship. Ever since that talk our team has changed for the better,” Olsen said. “In our recent outings we have really improved defensively, playing more as a team on offense as well. Every player has an invested interest in our team’s success, and it’s fun to play for a dedicated coaching staff.”

Behind a 20-point effort by Khalid Thomas, they defeated the Grant Generals in their season opener by double digits (84-74).

Clackamas rolled into the Lion’s Den, however the Cavaliers got rolled in round one of two (83-69). Braden Olsen and Keishon Dawkins held Clackamas to 38% from the field, 19% from 3 point range. These two teams would later meet in the 21st annual Les Schwab Invitational.

A two and a half hour plane ride to Arizona followed their second win, a trip to face 16th ranked Shadow Mountain on their home court. They would fall 82-74 even after Braden Olsen’s 19 point outing.

In the 21st Annual Les Schwab Invitational (LSI), Jesuit’s fourth quarter comeback wasn’t enough as the Lions edged out the Crusaders 91-90 in their first matchup. Next game was one that Oregon basketball fans couldn’t miss.

Sixth ranked Garfield, out of Seattle Washington, posed as a challenge for West Linn. Garfield’s shooting percentage matched the Loins’ at 55%, as the Bulldogs scored with time ticking down in a two point victory (74-72).

“That matchup against Garfield proved to our team that we can play with anyone. We battled hard, and after that loss it was hard to look back positively on that game,” Olsen said. “Looking back now it was a turning point in our season, as a captain I stressed that playing together as a cohesive unit would lead us to a successful season.”

Cavalier point guard Elijah Gonzalez, finished with 32 points in a highlight-filled performance. Clackamas got their revenge after forcing a late turnover on the baseline. In a thriller the Cavaliers got a coveted one point win (88-87) leaving the Lions to start their season with a 3-3 record.

A string of victories followed their heartbreaking loss. West Linn defeated Grant (73-71) in the final game at LSI. Olsen earned himself the Mr. Hustle award at the conclusion of the tournament.

Michael Hadeed provided a spark with 9 points against Tigard, then 11 versus Canby.

Martin Luther King Day had West Linn on a bus to Lewis and Clark College for a matchup against top ranked Jefferson. Through three quarters both Lions and Democrats battled close, trading buckets and leads back and forth. Jefferson capitalized on points off turnovers (POT’s), finishing with 15 compared to the Loins’ eight. Late in the fourth quarter, Democrat center Kamaka Hepa fought down low on the glass, giving Jefferson a slight rebound advantage. Jefferson Guard Geno West finished with 32 points in a 90-77 win; handing West Linn it’s 4th, and most recent loss on the season.

Sherwood couldn’t match the athleticism of shooting guard Nolan Bertain, who finished with 23 points in an 85-38 Lions win.

“Our last couple games we’ve focused on crashing the boards and putting in full effort on every offensive and defensive possession,” Thomas said. “We’ve focused on working the ball inside, while looking for easy buckets.”

Anthony Williams, senior Team Manager, scored his first points in a high school basketball game this past Thursday, off a corner three to help advance West Linn past Newberg 94-52 in the team’s tenth win.

Looking forward there are high expectations from both players, coaches and community members alike due to success in recent years. ‘Culture Wins’ is in big bold letters on the Lions’ shooting shirts, and with new found identity players and coaches know anything less than a state championship is a disappointment.