As only a sophomore, Sean Harman dominated the state tournament and will now forever be known as a state champion 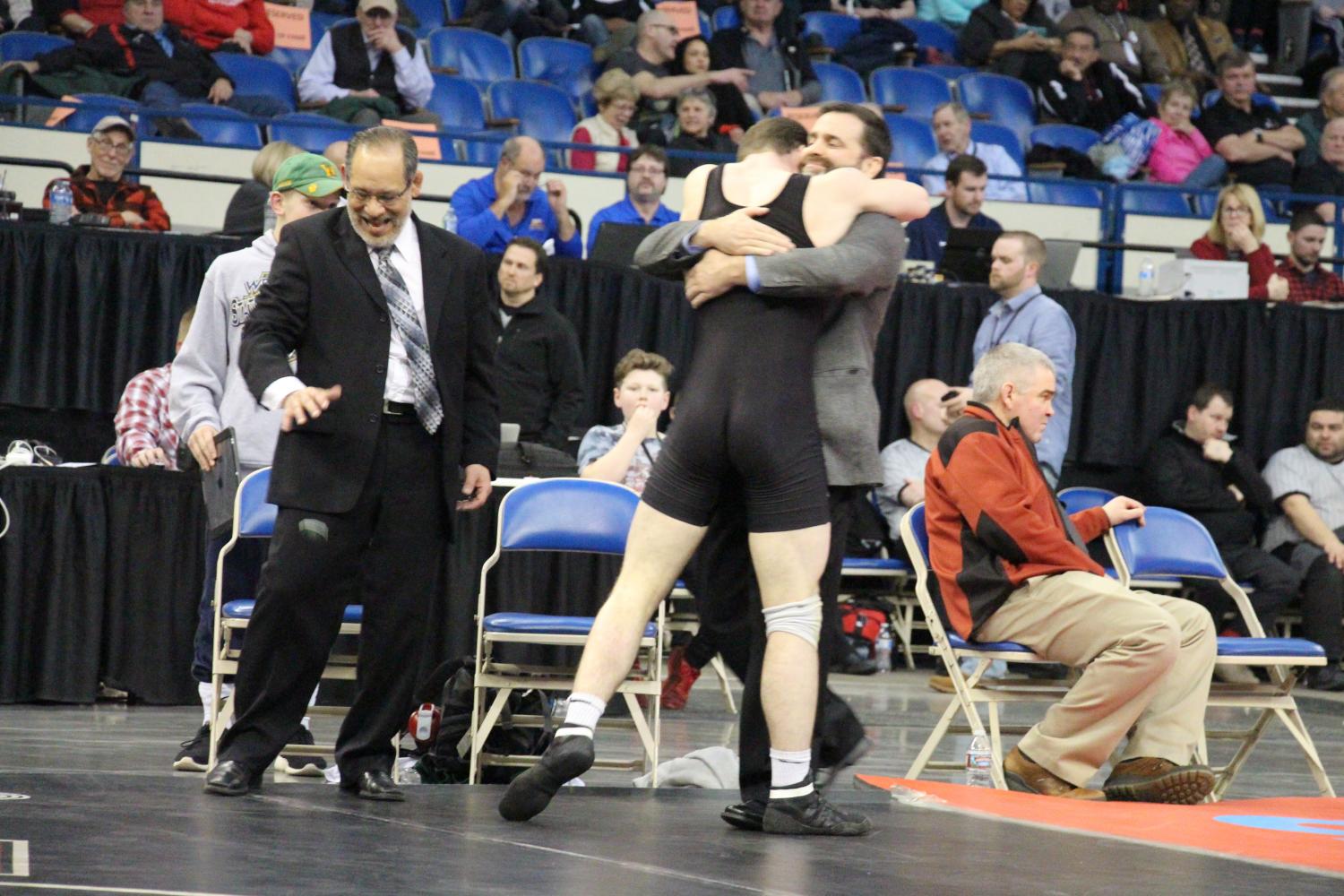 Celebrating after a pin with his father and head coach for his first ever state title, sophomore Sean Harman is overcome with emotion as he looks towards the crowd. Sean’s title came in the class 6A 152 pound weight class, and he is only the second Harman ever to win a wrestling state championship.

When someone prepares for something their entire life, the feeling of achieving it is something that can’t be described. For sophomore Sean Harman, a state title in wrestling was that thing.

Being the youngest in one of the most well-known wrestling families in the entire state of Oregon, the sport is something of second nature for Harman. His grandpa and father both wrestled at Navy, with his grandpa finishing his wrestling career as an alternate for the 1964 United States Olympic wrestling team. His two older brothers wrestle at Navy, and both by way of West Linn where the oldest brother Ryan Harman (who is also a team captain for the Midshipmen) was a state runner up, and the middle brother Tim Harman was a state runner up. Despite their families wrestling prestige, Tim is only other Harman to ever win a state title.

Growing up and watching his older brothers succeed was just more motivation for Harman as he set his own lofty goals early in his career.

“Watching my brothers succeed before me showed me everything was possible if I just put the time in,” Harman said. “I wanted to win a state title ever since I was little but I never really believed I could until last year.”

This last year as a freshman,  Harman made it  to the state title match only to lose to Jefferson senior Jasiah Williams by fall in the second round. While some would be defeated by this type of loss, it only fueled Harman to work harder and want it.

“Last year’s loss motivated me but I don’t think things would have been different if I didn’t win it. I felt like I dominated the whole state this year and I still feel just as hungry for more.” Harman said.

No one in the entire state wanted it more than Harman. He put in grueling hours of work everyday during the offseason and where some might slow down and relax during the actual high school season, Sean just started to push himself harder.

“The process was long and hard. I spent about three and a half to four hours on the mat and I was always a little banged up. It was a struggle but worth every minute,” Harman said.

To say that Harman was prepared entering the state tournament would be a major understatement. Going in as the number one seeded wrestler at the 152 pound weight class, expectations were high. Especially for a sophomore who comes from a historic family of wrestlers,  all eyes were on him to perform the best he has all season. But Sean didn’t even notice. To him, it was just another tournament.

His dominance throughout the event was basically unheard of. His first three matches lasted a combined total of only eight minutes and twenty two seconds. His only full match of the weekend came in the semi-final round against junior Josh Grant from Century. Just one round later, his first state title came off of a pin in just four minutes and forty one seconds.

“I can’t describe it. It was one of the best feelings ever especially because I lost the year before,” Harman said. “All of the hard work finally payed off.”