Cheerleading finds recent success due to dedication and decisive bond

Finding support from one another, Varsity and Junior Varsity impress at State Cheerleading Competition. 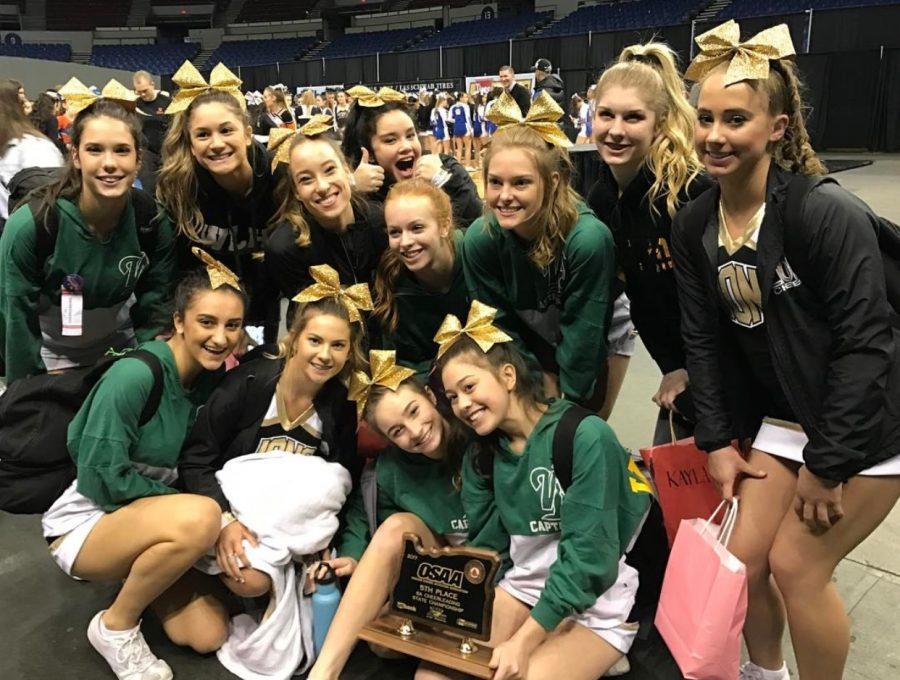 Varsity sports a fifth place trophy after competing at the State Cheer Competition.

Cheerleaders sporting green and gold finished strong in taking fifth place at the Oregon Varsity State Competition, then coming out on top weeks later in the Junior Varsity division. Vanessa Nidy, junior cheerleader, battled a knee injury all season long but still stayed active in support of her teammates.

“I was able to watch our team get to state, and fight to show everyone how hard they had worked,” Nidy said. “Previously they competed three other times before the state competition, each time getting better. They seemed very confident going in, they tried their hardest putting in everything they had into the routine.”

Throughout the competition, Nidy and her teammates began to decipher and analyze each team’s performance; questioning their ability to compete.

“After watching teams in our division, our team and myself included began to rank ourselves based on how well other teams did compared to how we performed on the mat,” Nidy said.

Results are announced in front of teams, parents, coaches and other observers who range from all across state boundaries. Calling off teams in order, from top to bottom, each member was anxiously waiting for ‘West Linn’ to be called.

“Once it was time for awards I hoped and prayed that we would place top five, sitting on the mat that’s what we were striving for, Nidy said. “They called sixth place, then fifth and as they announced our name our team was honestly shocked, even caught off guard. We had done it! Accomplishing our goal and making top five, you could just feel the vibe from everyone. I was so proud of the team, it’s definitely a moment I will never forget.”

Practice for both Varsity and Junior Varsity are a time for cheerleaders to improve before competition, and bond as a team. Support and unity has pushed each athlete to vault over barriers in their way of accomplishment and success.

“Practices are always very positive and energetic. Everyone makes sure to encourage the other girls, and we help each other when needed, not to mention we laugh a lot when we’re together,” Nidy said. “Practice is a place where we get all of our energy out, be crazy and have fun; but at the same time we’re able to be productive and use that positive reinforcement for our advantage.”

Cheerleading is more than just the pom poms, it’s the act of representing a community and coming together to support one another. Family is very important to both the athletes, and coaches, involved in West Linn Cheer.

“Both Varsity and JV have a special ‘family feel’ in one way or another. After spending day after day with each other, from August to March, we learn more about everyone as individuals who we are together as a team,” Nidy said. Every practice, game or competition we’re always there for each other! We love cheering each other on, and making sure we show our love and support for one another.”

Teams team faces adversity, however it’s how you respond to adversity that defines your ultimate success. Through support of one another, each athlete was able to face challenges along the way.

“As a team we never stop improving, and this season we faced both major and minor bumps along the way, but we never give up,” Nidy said. “We keep going and we get better together, and that’s what family is all about. Never give up on each other, you love everyone unconditionally, and you keep growing together.”

Athletes who have been a part of the program for years, have seen it improve quickly after getting Head Coach Shannon Maloney. Not only has the team risen in the rankings, but the growth of individuals has been exceptionally important as well.

“We have a competition routine that we work on throughout the football and basketball season,” Aly Sato, senior captain, said. We compete in five competitions per year, then state to finish our season. Cheer has helped me become a better teammate, as well as a better leader.”

Next year seniors leave which opens spots for underclassmen to fill. Junior Varsity competed in their own State Competition, and came out on top. Cassidy Juster, freshman cheerleader, is both a competitive dancer and cheerleader who reflected on JV’s successful finish.

“Two hours four days a week is how much we practice, plus a game or competition if not both,” Juster said. “Before we perform everyone comes together in support for one another, which has helped us along the way. It was really fun to end our season with a huge win.”

A program on the rise, Lions cheerleaders have started what could be another championship contending organization.