Race to the Chiles Center: Men’s and Women’s Basketball Second Round Recap

Students supported both teams as the boys move on to the Quarterfinals, while the Girls fall in the final minute. 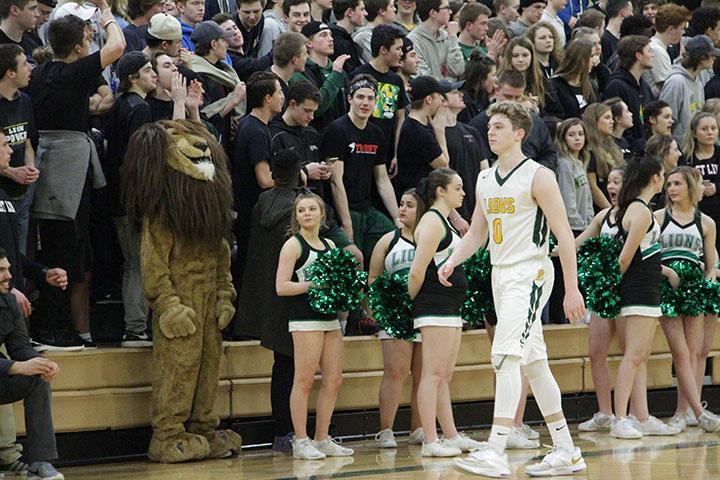 Braden Olsen, senior guard, walks in front of energetic student section in a 76-65 win against Lincoln.

Coach Tyler Toney and the boys faced a slow start, trailing early in the first quarter. Playing without senior forward Khalid Thomas, the Lions rallied back off a 10-0 run. Keishon Dawkins took over by scoring inside, using his 6’6 frame to overpower opponents on the offensive glass. Braden Olsen, senior guard, had this to say about Dawkins’ dominant outing.

“Keishon came up clutch for us,” Olsen said. “We needed his inside presence with Khalid out, and he definitely made the most of his minutes. Every possession he gave full effort, which helped us down the stretch get second chance points, and run high tempo after critical defensive rebounds.”

Student support was evident both on Friday and Saturday evening; students, parents and community members electrified the gym from first tip to final buzzer. Nolan Bertain, senior guard, had this to say after the boys’ second round victory.

“We have worked so hard for this moment,” Bertain said. “Playing here in front of the best student section in the state, this is what high school basketball is all about. We’re moving onto the Chiles Center, which is special for me because I’ve personally never played there before. I’m incredibly grateful towards my teammates and our supporters, they gave their all.”

While the women’s team fell on Saturday Kennedy Fulcher, senior forward, reflects on her final game before the start of her collegiate career at Concordia University.

“Our team fought so hard against St. Mary’s,” Fulcher said. “Bendu was incredible, I think she ended up with forty points, but we gave full effort even to the final minute. Everyone after the game was emotional, I’m so grateful for everyone who has been there to support me throughout my time at West Linn. My teammates, coaches, friends and family have played a huge role in my development both on and off the court.”

In preparation for Wednesday’s game against seventh seeded North Medford, senior forward Khalid Thomas will return off a knee injury for the men’s 6A OSAA Quarterfinal match up. Thomas holds division one interest from multiple schools, however for now he is focused on winning what would be a fifth consecutive state championship.

“I’m looking forward to playing North Medford,” Thomas said. “Going into the quarterfinals I feel ready for whatever comes my way. My teammates, coaches and community are all fired up and ready for University of Portland. Everyone has taking the season one game at a time, and we’ll carry the same mentality throughout the playoffs.”

Tune into NFHS Network (Link The NFHS Word) to watch #2 West Linn take on #7 North Medford, live from the Chiles Center for the 6A OSAA Men’s Quarterfinals.