A roaring 2-0 start to the season, after soundly defeating Sunset 11-6. 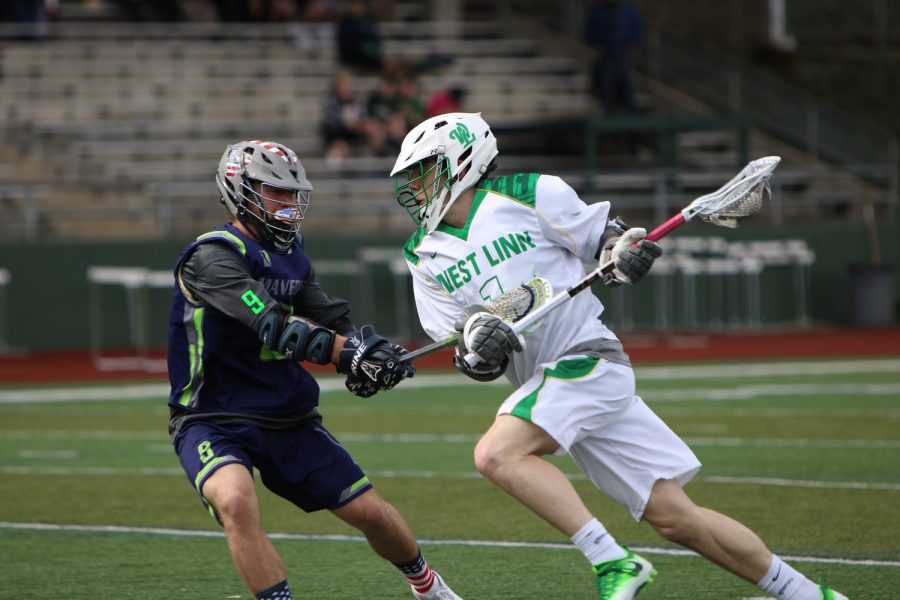 Dodging from the top of the box Elijah Gaunt, senior midfielder, shakes defender in 13-5 win over Mountain View.

Rainy weather provided sloppy conditions for Tuesday’s matchup, where boys lacrosse bussed to Sunset High School for their second matchup of the season. Led by sophomore Ross Scott, the offense seamlessly ran through the talented attackman. Scott has big shoes to fill after the graduation of Ryan Klose, now playing division one lacrosse at Lehigh University.

Quarter one started off with an Apollo goal from midfielder Bennett Greenbaum, off by a face dodge near the top of the box. Answering soon after, Scott along with teammates Cody Fretwell and Miles Moscato, scored to take a 3-1 Lions lead with 6:10 remaining in the first quarter. Sunset came out of a timeout with a quick goal from senior midfielder Garrett Lewis. Elijah Gaunt, Lion midfielder, dominated face offs winning five of seven to start the game. Possession gave the attackman Scott opportunities to score, which he fully took advantage of piling on two more goals before the end of quarter one.

Tillman Gallagher, a senior midfielder headed to Michigan, scored in the first forty seconds of the second quarter narrowing the Sunset deficit to three. 17 seniors fill Sunset’s roster, compared to West Linn’s 10. Gaunt and Jacob Park, junior attackman, scored back to back goals bringing the score to 7-3 with 7:50 remaining in the first half. Mike Nichols, Sunset midfielder, fired a shot into the top left corner; a 7-4 lead as time ticked off with 4:55 left in the second period. Before half number one concluded, Gaunt pumped in another score after a won faceoff from the X.

Neither team scored until the final moments of the third quarter, due to numerous saves from both senior goalkeepers Creegan McGovern and Travis Hemstreet. Sunset’s Ajax Zappitello, freshman defenseman, made multiple key stops along with Dawson Loehner, senior defenseman, from West Linn. Fretwell buried his second shot with 22 seconds remaining in the third period.

Unassisted goal number four came easily for Scott, giving Head Coach Mark Flood and the Lions a six goal cushion with 10:51 remaining in the final quarter. Just a sophomore, Scott had this to say about the mentality from both himself and his teamates in preparation for Sunset.

“My mentality coming into this game was just to get this win,” Scott said. “I know I’ll do whatever it takes to help my team succeed down the stretch of games. As a team everyone was motivated and ready to play. We know that if we all give our full effort for each other and out coaches, then the rest will take care of itself.”

Bennett Greenbaum converted on his second goal, after a skip pass for an easy mid range rip. Flood quickly called his first timeout of the half, leading 10-5 with 7:19 still on the scoreboard. Jacob Leonard, sunset attackman, scored with 2:31 left in the final quarter. Zach Shelton, senior attackman, scored in the final minutes as the green and gold defeated Sunset on their own turf 11-6. West Linn’s next matchup will be played in Arizona, against a defending state champion during the team’s Spring Break trip.