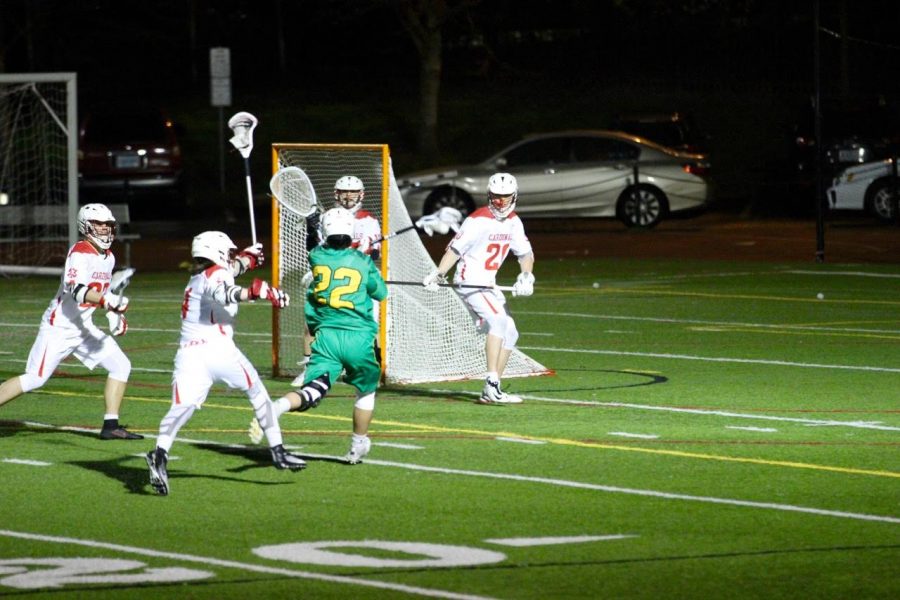 An undefeated 5-0 start to the season for Boys Lacrosse was put to the test against the Lincoln Cardinals Tuesday evening. Three impressive wins while facing top teams in Arizona, pushed the Lions towards the top in numerous polls, ranked consistently as a top 50 team nation wide.

After removal of his appendix earlier this season Mitchell Johnson, senior attackman, followed up Scott’s goal with one of his own. (West Linn Leads 2-1 w/ 6:33 1st Q.)

Phillips in cardinal red then evened the score with his second goal with under six minutes in the first period of play. (Tied 2-2 w/ 5:43 1st Q.)

Two players scored in the second quarter both of which wearing forest green jerseys with golden numbers.

Miles Moscato, a junior midfielder heading to Salisbury, extended the Lions lead after a goal from the left hashes with time ticking down before halftime. (Lions Lead 6-2 w/ :41 2nd Q.)

Mitchell Johnson, Lion attackman, and Isaac Baker, Cardinal midfielder, both scored within 30 seconds in the final moments of the third quarter. Johnson with two goals in the final half minute.

Baker converted on a shot with just over a minute remaining drawing the cardinal closer, but the response from Johnson was too much to handle for Lincoln near the end of the third period.

Johnson’s second goal of the game came with thirty seconds ticking off the clock, his third moments later with under five seconds to play.

Ethan Stahl, midfielder, dodged from the top of the box to bring the Cardinal within four; however Stahl’s scoring efforts proved to late for Lincoln. (Lions Lead 9-5 w/ 2:30 4th Q.)

Scott piled on his fourth goal with 23 seconds remaining in the final period. As a sophomore, Scott’s led the Lions in scoring this season. (Lions Lead 10-5 w/ :23 4th Q.)

Head Coach Mark Flood and West Linn will host OES Saturday afternoon, after improving to six wins and zero losses on the season.