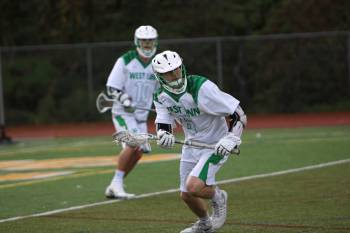 Dodging from behind the goal Jacob Park, junior attackman, shakes defender in 12-7 win against OES.

Multiple times West Linn has been in the final four along with OES, just not on the same side of the bracket. Saturday both teams traded scores back and forth, the fourth quarter cluttered with goals from the green and gold; balanced scoring allowed several players to get their hands free for shots.

Soon after Slusher’s score, West Linn responded with a goal of their own. Mitchell Johnson, senior attackman, had a wrap around check which drew an uproar from the crowd. Miles Moscato, junior midfielder committed to Salisbury, capitalized on Johnson’s defensive efforts with rip from 15 yards out. (Tied 1-1 with 7:15 remaining first quarter)

Transitions off turnovers sparked high flying offense for both teams. Johnson was called for a slash midway through the first quarter, leaving West Linn man down for sixty seconds. Slusher scored his second goal with an underhand rip, to put the Aardvarks up 2-1. Just over four minutes remained in the first period. (OES leads 2-1 with 4:12 remaining first quarter)

Cody Fretwell, junior midfielder, has made his case for most improved player this season. Fretwell made his mark with 3:30 left in the first quarter, scoring the Lions’ second goal to even the score. (Tied 2-2 with 3:30 remaining first quarter)

Dodging towards the crease Elijah Gaunt, senior midfielder, scored while falling away from the goal with an underhand scoop shot. (Tied 3-3 with 7:14 remaining second quarter)

No doubt Mitchell Johnson made an impact after his question mark rip, with just over two minutes left in the second quarter. Johnson’s first goal would lead to many more down the stretch. (West Linn leads 5-3 with 2:02 remaining second quarter)

First half scoring was lead by Slusher with three goals for the Aardvarks. Five players were in the scoring column for the Lions after two quarters.

OES’ Slusher was joined on the board by Nick Lund, scoring off a catch and shoot for the first goal of the second half. (West Linn leads 5-4 with 6:48 remaining second quarter)

West Linn scored six goals in the final quarter of play, the first in the second half from Johnson over his defender into the lower right hand corner. (West Linn leads 7-4 with 11:04 remaining fourth quarter)

OES scored in the eighth minute, however Johnson responded by throwing a behind the back pass to Ross Scott, sophomore attackman, for an easy crease score. (West Linn leads 9-4 with 7:38 remaining fourth quarter)

Defensively, Johnson had a takeaway which lead to another score after an OES Score. (West Linn leads 10-5 with 5:38 remaining fourth quarter)

Aardvarks score another goal to bring deficient to four. (West Linn leads 10-6 in the fourth quarter)

O’Brien and Moscato both scored goals, the first from O’Brien with 4:25 left, Moscato’s came with over three minutes remaining in the final period. (Lions lead 12-6 with 3:17 fourth quarter)

Advancing to an undefeated 7-0, West Linn will host Clackamas Wednesday.