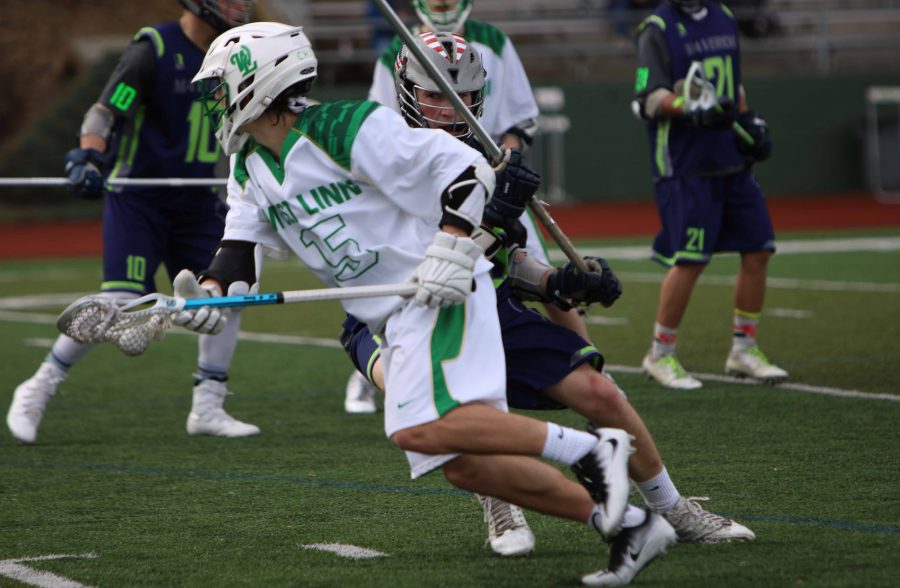 Dodging past defenders Ross Scott, sophmore attackman, looks up the field to teammates in 12-7 win against Oregon Episcopal School.

Potential is a word that has been used when talking about the boys lacrosse team this season. Elijah Gaunt, senior midfielder, spoke about the depth of this year’s team compared to previous seasons.

“We don’t have two superstars. We have a bunch of solid players on this team,” Elijah Gaunt, 12 said. “One significant strength is our ability to rest one player, and bring in another who is equally as talented.”

Facing Sunset in poor weather conditions, the team proved that they could compete with a team who is expected to contend for a state championship this year. Finishing the game with an 11-6 win on Sunsets home field, both under and upperclassmen rose to the challenge and the team is now quickly rising in the rankings. Ross Scott, sophomore attackmen, stood out in this game, dodging and weaving his way through Apollo defenders finishing with four goals. Defense, led by Dawson Loehner, senior High Point commit, held Sunset to 6 goals, and is part of the reason why many think this year’s team will be playing deep into the playoffs.

Like many of West Linn’s sports teams boys lacrosse chased the sun and went to Arizona over spring break, where they had decisive victories and came home undefeated. With a combined score of 35-9, they beat two teams who have won the last three Arizona state championships.  The toughest match up of the trip was expected to be from the Northeast powerhouse Holderness School out of New Hampshire. Winning 11-8 the Lions finished the trip 5-0 and came back to Oregon to continue their regular season.

Next up, the team played an away game at Lincoln High School in Portland, where the two traditional powerhouses met for the first time this season. Gaunt once again set the tone of the game from the first faceoff. Creating fast break opportunities for teammates, and dominating from the X, his quick hands and physicality helped them gain an early lead. Despite not having starting goalie Creegan McGovern, senior goalkeeper, who is suffering from a concussion, and Drake Lovato, senior defenseman, who is out with a separated shoulder, West Linn came out with the victory against Lincoln 10-5.

After such a successful start to the season, confidence is riding high as they pursue a state championship. The program has been exceptional in recent years, winning state titles in 2014 and 2015, and the expectations are always going to be high. The program has developed a strong roster, and this year in particular there is a depth of talent from starters all the way down through swing players.  By having so many new players on varsity, they rely on traditions to bring the team together. Gaunt spoke with me about the things they do that carry on from years past.

“While there are changes from year to year, we still take box rips before every game, and go to 5 Guys after we’re done playing. Our team is a family, and we are striving to be more together as a collective unit as the season progresses.”

During regular season play West Linn will face each league team twice before the playoffs. Lakeridge will most likely challenge for the top spot in the Three Rivers League, and out of league OES will be led by two standout players committed to division one programs. In this match up two OES players to watch will be Alex Slusher, sophomore attackman headed to Princeton and Jack Schlendorf, a goalkeeper committed to Michigan.

Coach Mark Flood’s most daunting challenge may come post-season in the playoffs. Pre-season polls show the strongest team the Lions could face will be Jesuit who contended for a state championship last year. Bringing back players including Sam Handley, an attackman who is committed to the University of Pennsylvania, and Tucker Dordovick, a midfielder committed to Syracuse, the Crusaders are looking to make another state title run.

If the Lions make postseason play they will have home turf on their side, as West Linn hosts the state playoffs come June 3rd.