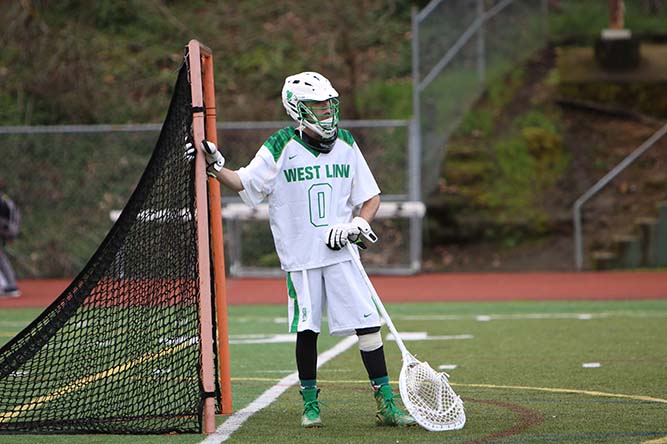 Looking towards the sidelines, Cregan McGovern, Senior Goalkeeper, finds time between possessions to communicate with coaches.

Pace of play gave both West Linn and Lake Oswego multiple fast break chances throughout the game. Down the stretch Laker turnovers allowed for multiple runs from players such as junior midfielders Cody Fretwell and Max Michelon. Balanced scoring and ball movement proved as a catalyst in what many believe to be West Linn’s most important win this season.

West Linn’s first score came from Ross Scott, sophomore attackman, who’s been a contributor offensively from the start of the season. Scott earned topside position on his defender, and placed the ball into the bottom corner with just over 11 minutes remaining in the first.

A second sophomore attackman Dylan Baker would score, this time sporting blue numbers. Capitalizing off a quick Loins turnover, Lake Oswego moved the ball up field like a pinball machine. With Baker able to finish from five yards out, the fastbreak ran seamlessly bringing the Lakers within one.

Assisting on an earlier goal, Johnson got on the score-sheet himself after an inside roll on the right hashes.

Cody Fretwell, junior midfielder, has shown his athleticism both defensively and in clearing the ball as well. Fretwell had a hit on a Laker midfielder that drew cheers from the bench. This stop led to a transition finish for fellow junior Max Michelon playing midfield.

Pinch and pop. Gaunt won a faceoff by pushing the ball forward to himself, allowing the senior to run in open space. Teammates cleared the way for Gaunt to dodge, an attempt which converted into West Linn’s fifth goal.

Just under five minutes remained in the first period when Zach Shelton, senior attackman, dumped in a score to increase the Loins lead to five. Shelton played defensive back for the football team this past fall, which is evident as he uses his physicality to overpower defenders with ease. Shelton’s goal was West Linn’s fourth straight.

A hot start to the second period followed a strong finish to the first for Marsh. Scoring his second goal within the first two minutes, the Lakers now trailed by just three.

Lake Oswego converted on their third straight attempt after another caused turnover at midfield.

Scoring his second goal Shelton snapped the Lakers’ three goal run, propelling the Lions to a 7- 4 lead with just over three minutes remaining until halftime.

In the start of the second half Johnson placed his second score into the top left hand corner.

Both teams traded goals back and forth. Lake Oswego faced a four goal deficit at home.

Cody Fretwell launched a shot from ten yards out, hitting the back of the net with just a second over six minutes remaining in the third quarter.

Lake Oswego’s Baker scored once more with under five minutes to play. Baker’s scoring efforts were soon matched by Gaunt, who piled on another goal off a faceoff win.

On a clear with time ticking off the clock, Fretwell left three midfielders in blue searching for their ankles near midfield. Weaving through traffic the junior midfielder scored off an acrobatic shot with just 32.7 seconds left until the start of the final period.

A roll dodge to the left hashes gave Jonas Hunter, freshman attackman, space to get his hands free for a shot. Firing through multiple defenders, Hunter’s attempt found the top left hand corner after bouncing near crease.

Having a hat trick while creating scoring chances for teammates, Fretwell zipped a pass to Michelon for his second goal.

Right handed attackman Jacob Park still finds way to beat defenders on the left hand side. Park caught a pass from up top on a banana curl, and placed the ball into the net with ease.

Referees had given Johnson multiple penalties for warding off with his free hand, but with under four minutes left to play the senior attackman would convert on his third and final goal. Johnson’s shot was heard from up in the press box as it stung the top left corner.