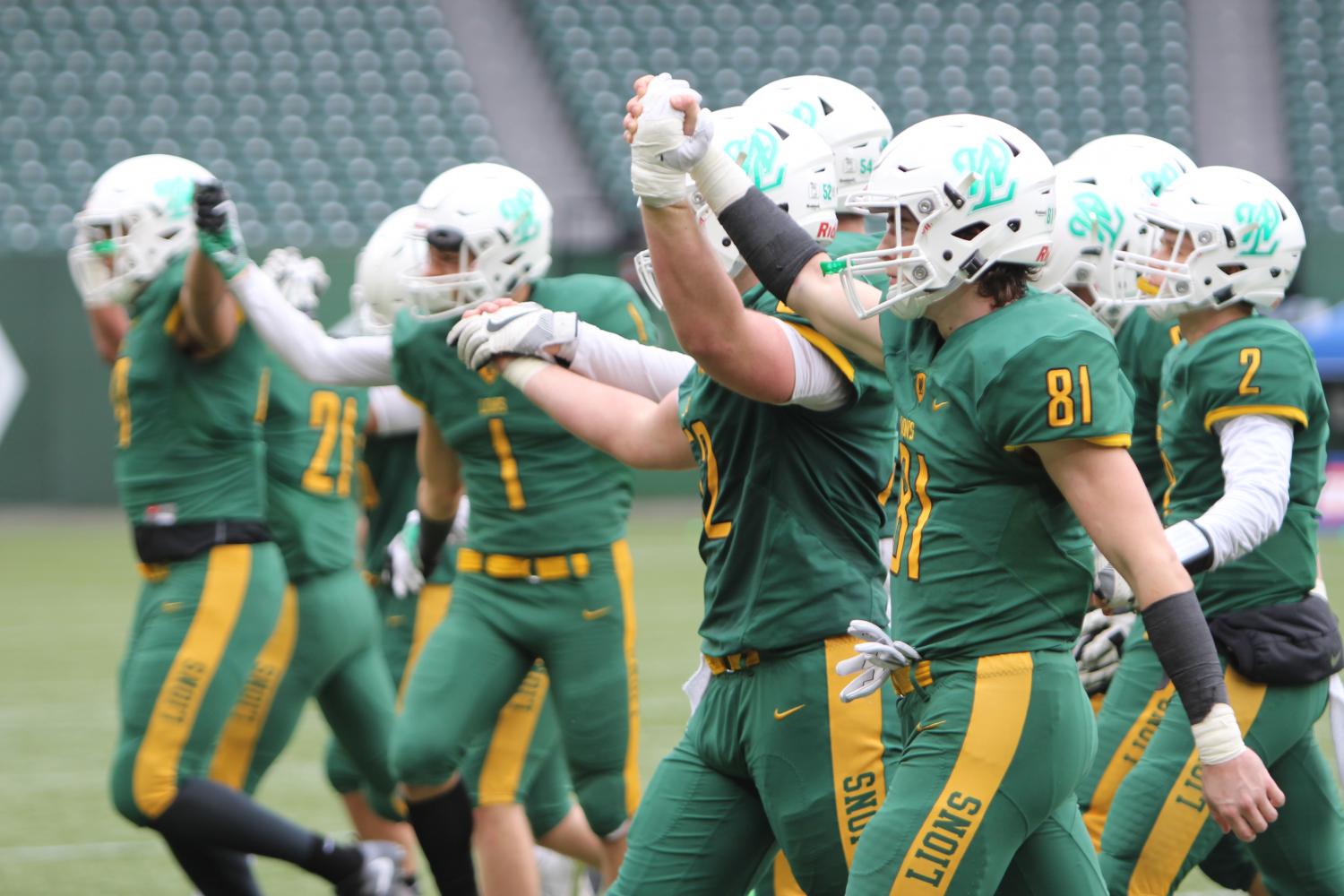 After running one last play as a team, all of the Lions’ offensive starters walked off the field together for the last time. West Linn’s offensive unit put up historic numbers all season en route to the Lions’ first state championship in school history.

Right as us seniors were getting ready to enter high school for the first time as freshman, everyone around our incoming class who had been through the whole high school experience before would always say to us “it goes by fast, it will be over before you know it.” Now of course, us being young and naive at the time made us think that everyone would say the same thing and that we still had four long years ahead of us. But now that we’re actually here as seniors, it’s crazy to look back and see how right everyone was and just how fast that time flew by.

For student athletes, the last season of high school sports your senior year is something special. You know that it all matters because no matter what happens in that final season, regardless of whether you’re going to play collegiate level sports or not, that’s it for your high school sports career.

Going out on top is something that almost every athlete will dream about but very few will achieve, and winning it all your senior season means a lot to all the players, and it is a pretty good way to finish a high school sports career.

“It (final season) meant a lot to me because growing up with all my teammates and playing with them through all of youth football and all those years and to finish off with a state championship… Which was our ultimate goal,” Alex Forsyth, University of Oregon bound senior, said. “It was a pretty good way to wrap up high school sports.”

For seniors on championship caliber teams, they know that their final season is really their last chance to accomplish a goal that they’ve been trying to achieve ever since they entered high school. In addition to that last year being it for high school sports, it’s just another reason why that last year that they have can mean so much to them.

“That last season was really important because I knew that it was our last shot to accomplish the goal we’ve had for the last four years,” Brandon Ahlgren, senior offensive lineman, said. “It was also a year for redemption since we had lost the year before we all had a fire burning in us to get it done.”

Unfortunately, not every senior season ends with a win. Some bumps in the road prove to be too much for even the best teams to handle. When a season ends early it’s the worst, especially for a team who expected to go a lot farther.

“The loss (in the semi finals) was really tough on all the seniors having worked so hard all year. It was devastating knowing that was our last time together on the field playing West Linn lacrosse.” Connor Obrien, senior on the lacrosse team, said. “Most of the seniors have been playing together since third and fourth grade and haven’t faced many losses while growing up together so it definitely was a learning experience, but now something to dwell on and over shadow our success in the past years.”

No matter the outcome of a student athlete’s final season, the hardest part might be having to realize that this is your last time being teammates with the people that you’ve been side by side with, playing next to, working with, and training with since second grade. They are the people who you’ve known the longest, the people who you’ve spent the most time with, and they could just be your best friends too.

“My senior season created a ton of lifelong friendships with my brothers out on the field that I will never forget.” Elijah Gaunt, senior lacrosse player, said.

One thing sports does really well is create lifelong bonds with the people that you play with. The friendships that are created are something really special, and at the end of that final season, it’s often pretty hard to say goodbye to that.

One more hard part of your last senior season is realizing that after all this, you have to say goodbye to your city too. The place that you’ve grown up in and played for over the course of an athletic career will no longer be your home, and you won’t be wearing the city name across your chest on game days. It’s a weird concept to think about, but it’s one that every athlete has to go through eventually.

“Senior season was really special for me because it was my last chance to play with all the girls that I’ve grown up with.” Summer Marshall, senior and state of Oregon runner up in women’s golf, said. “ High school golf has been an experience that I’ll never forget and I’m so proud to have been a Lion for the last four years.”

Sports are a great thing. They teach real life lessons, they create bonds that will last forever, and they give you incredible moments that you will never forget. As the high school year begins to wrap up and seniors prepare for the next chapter of their lives, it’s always fun to look back on our four years of high school and think about all of the great times. All of the memorable moments, on and off the field, will be things that we talk about for the rest of our lives. Senior year comes and goes fast and your final season of high school sports does too. Never take anything for granted and soak up every single second that you get to be here because in the blink of an eye, it will all be over and all you’ll have are the memories.