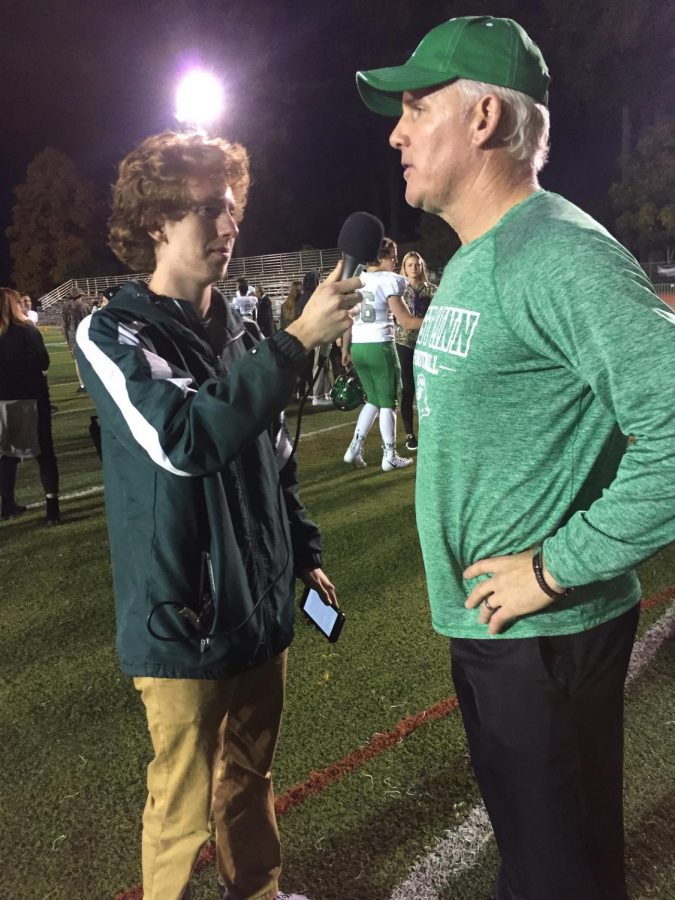 Rory Bialostosky: Coach, great to be with you. A couple of big wins for your program following a couple of tough losses and now we’re heading into the postseason so where are your spirits as the head coach as we head in that direction?

Coach Miller: I feel good. I would have obviously liked to win a couple of more games and the TRL, but Tigard and LO are good football teams. I think actually having some adversity and a couple of losses will humble us a little bit. Our defense is playing really well. I think we’ve giving up 10 points a game. Offense we just gotta get a little bit more consistent, a little bit stronger up there over the next few weeks. Hopefully, we’ll find out tonight, we’ll get a top 4 seed in 3 home games which would be very advantageous.

RB: 49-7 tonight. 49-0 last week. We’re gonna focus on the positives so what was the most positive thing that you took away from these last 2 wins?

CM: Well, I think our number one defense pitched a couple of shut outs so they’re doing very well. Offensively, we’re pretty efficient for the most part. We’ve got a lot of weapons out there so it was nice to spread the ball around and get Casey Tawa 2 touchdowns tonight. Qawi Ntsasa is lightening in a bottle and we ran the ball well when we ran it. So all in all it was good. We got out healthy so I’ll give it an A.

RB: Cody Fretwell with 12 points scored for the Lions versus Lakeridge. I’m sure you wished you had him on your fantasy team. He’s gonna be my guest on the show this week. It seems like he’s become a marquee player for this defense and the team in general. Would you agree?

CM: Yeah. Cody Fretwell is an excellent football player. Yes, I would love to have him on my fantasy team because he would’ve scored the most points for me of the season. He’s gonna play college across, but he could be an FCS cornerback. He’s a tremendous football player. Great kid. He plays very tough too so we’ve got good corners. It has been fun to kind of watch him progress and grow up this senior year.

RB: Lastly, a lot of people probably don’t know this, but you are also a baseball guy drafted out of high-school and then again in college. Fifth round by the Mariners. Game 3 of the World Series just concluded and the Astros pulled it out. They lead series 2-1. Who is Chris Miller rooting for to pull out the World Series this year?

CM: I was born in California so I grew up being a Dodger, Laker and a Ram fan. After time has gone by I haven’t been as big as a Dodger fan. When I played football in Atlanta, I got to know John Smotlz and all those guys in Atlanta so I pulled for the Braves. I just wanna see a good series, see it maybe go to Game 7 so either team is fine. But, sure, I’ve love to see the Dodgers win it.

RB: Coach, thanks a lot. This is our final regular season interview, it’s been fun.

CM: Your questions are awesome, Rory. You do a fantastic job. Go Lions.