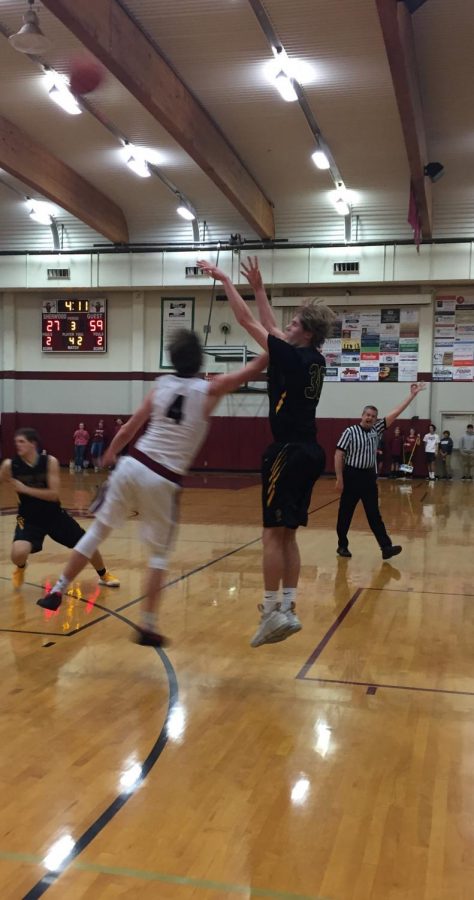 Jalen Thompson, senior, draws a foul as he shoots a three-point field goal on Jan. 19 versus Sherwood. (Photo by Rory Bialostosky)

For the first time in a few games, West Linn head coach Tyler Toney was all smiles following a near wire-to-wire victory by his team.

“I thought we played really, really hard and we really shared the ball. Those are two things that we really haven’t been doing as of late,” Toney said.

After having a Three Rivers League conference winning streak that spanned for over four seasons snapped versus Tualatin on Jan. 12, they’ve regained their footing in conference play, besting Lakeridge on Jan. 17, and now getting a much-needed road victory over Sherwood.

The Lions looked strong from the get-go, sinking Sherwood and sending some fans to the exits by halftime as they racked up 46 points over the first two quarters to take a 27-point lead into the break. Thompson, a senior, dazzled and showed his range, scoring 19 points in the first half alone and led the way throughout the game as one of the leading scorers, finishing with 22 points.

Keishon Dawkins, senior, signed to play football at Oregon State University in December but showed Lions fans his potential on the hardwood as well. He came alive in the second half to put the game out of reach, draining four three-pointers during the third period of play. Dawkins finished with 24 points.

Logan Maly, senior, contributed off of the bench in the first half by knocking down a three-pointer. He has established himself this season as a key rotational player.

“We really played well as a family. Everybody played a part in the win tonight,” Maly said.

Sherwood was led by Jamison Guerra, sophomore, who finished with 13 points.

The Lions improved to 9-6 overall on the year, and hold a 5-1 record in conference play. The game was West Linn’s first of eight straight contests on the road. Next they’ll head back out west to take on the Newberg Tigers on Jan. 25.

“Newberg plays hard. We’ll have to do the same thing, play really hard and play together,” Toney said.

Their next home game is in mid-February. Tip-off at Newberg High School is set for 7:15pm.