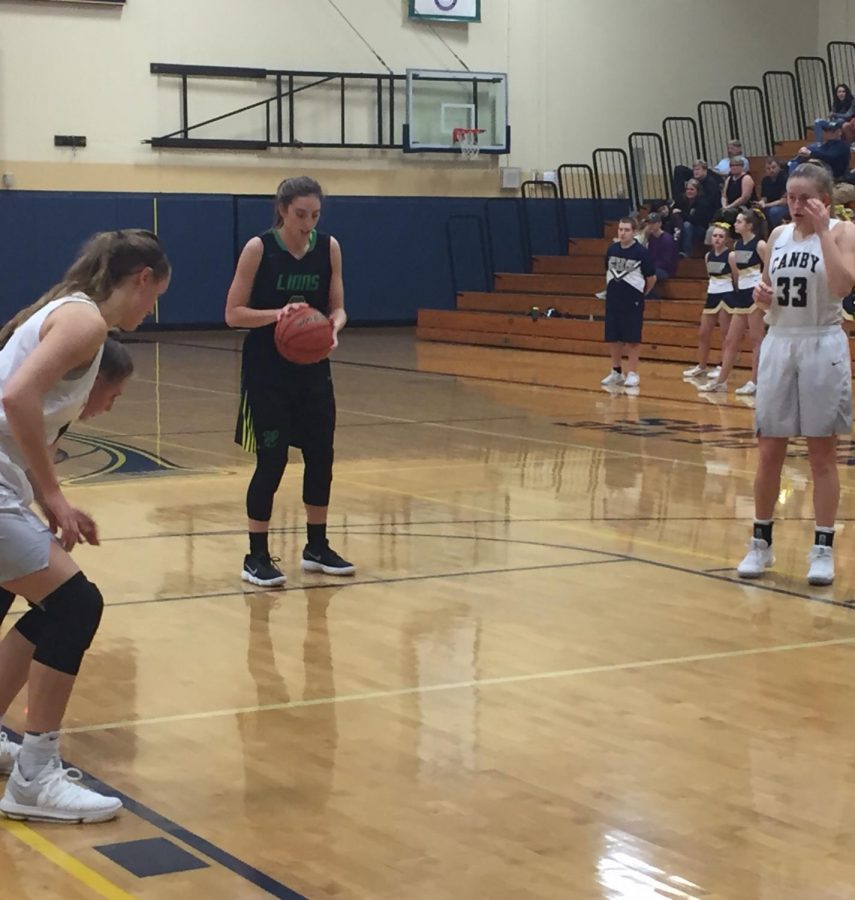 Lexie Pritchard prepares to shoot a free throw after making a layup and drawing a foul in the fourth quarter. (Photo by Rory Bialostosky)

It definitely wasn’t pretty, but somehow, someway, Lexie Pritchard, senior point guard, and company willed their way to victory down the stretch against Canby to improve to 10-2 in Three Rivers League conference play and 17-3 overall.

“We played with a lot of heart and we never gave up,” Pritchard said.

Canby, known for its slow pace of play, attempted to keep the ball away from West Linn, taking their sweet time on offense as the second half progressed. Slowly but surely, they edged their way closer and closer to the Lions, and eventually tied it up at 26-26 early in the fourth quarter.

That’s when Pritchard, known for her ability to put the ball on the floor and drive to the basket, took matters into her own hands. The Santa Clara University signee drove into the lane with perfect body control, tossed the ball off the backboard and into the basket, all while taking a push in the back from Canby’s Cassidy Posey, senior, drawing a foul.

Pritchard converted the free throw to give her team a 29-26 advantage, and the Lions never looked back, keeping Canby at bay by converting their free throws late in the game and going on to win 40-33.

Pritchard finished with a game-high 14 points. Makayla Long, freshman, finished right behind her with nine points. The Lions were without one of their star players, Kennedi Byram, senior, who was out with a sprained ankle. Her status for Tuesday’s game versus Lake Oswego is unknown.

With the loss, Canby dropped their third straight game and fell to 6-5 in league and 11-8 overall.

This was a quality, feel-good win for the ladies, who dropped a tight game to Tigard earlier in the week on Jan. 30.

Tigard remained in command of the TRL by besting St. Mary’s Academy, but West Linn is in control of second place in the league standings and is ranked sixth in the OSAA rankings with four games remaining in the regular season.

Next, West Linn takes on the Lake Oswego Lakers at home on Feb. 6. Tip-off is set for 7pm.