Unlike on Jan. 12, West Linn got the best of Tualatin despite 40-point effort from Alexis Angeles 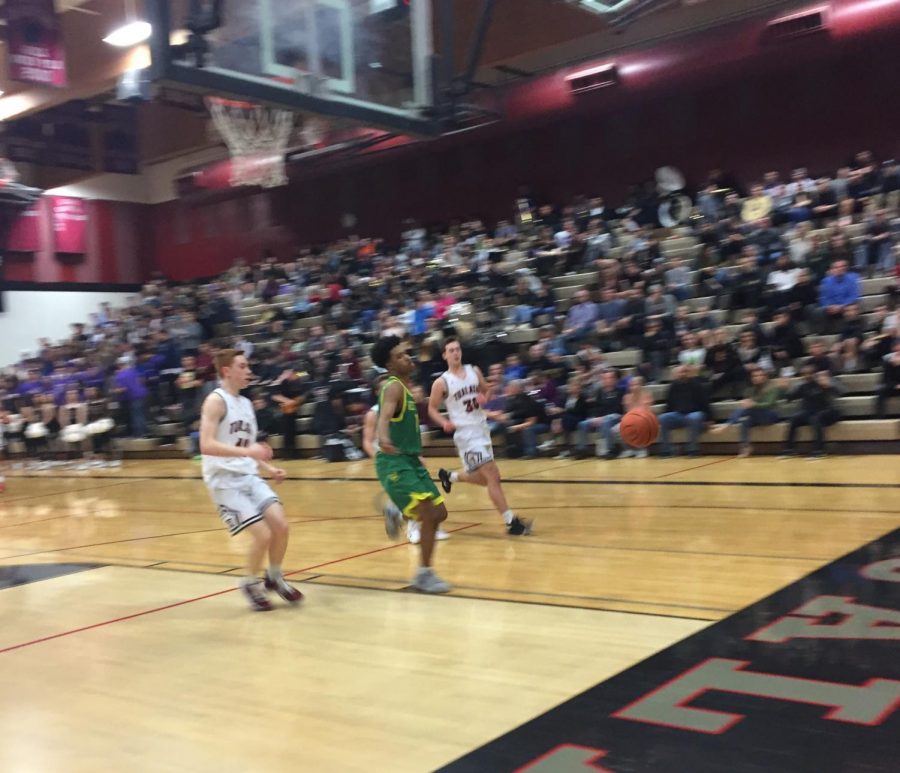 Micah Garrett tracks down a loose ball versus Tualatin on Feb. 9. Garrett scored 18 points in the game. (Photo by Rory Bialostosky)

The West Linn boys basketball team got just that on Friday night with a gutsy win over the Tualatin Timberwolves. After dropping a critical Three Rivers League conference game versus Lake Oswego in a blowout just days earlier, they bounced back in somewhat stunning fashion.

In the first quarter, the Lions jumped out to a 12-7 lead, shooting the ball well throughout the opening minutes of the game.

It wasn’t going to be that easy, though. After all, Tualatin did defeat West Linn 70-63 earlier in the season in mid-January.

Down by five points early, Alexis Angeles, senior, came alive. Angeles scored 14 of the team’s 20 points in the opening period to put his team back in front. Tualatin led by six at the end of one.

Facing adversity after going cold following a fast start and playing their first game without two important players–Keishon Dawkins, senior, was out due to shoulder surgery and Ahmir McGee, senior, was away on his official athletic college visit to Stetson University–the Lions needed someone to lift them up and keep them in the game.

Micah Garrett, sophomore, quickly became the spark that the Lions had to have. Garrett showed his range during the second period, scoring 10 points on four-for-five shooting including two three-pointers, propelling his team to a 25-point second quarter.

Garrett led the way for West Linn with 18 points in the game.

“They got us at home so we had to come here and get them,” Garrett said.

Both teams traded baskets and the second period featured plenty of ties, but to cap off the first half, Bryson Crockett, sophomore, drained a three as time expired to break a tie and give West Linn a three point lead, 37-34.

That three by Crockett proved to be a momentum-shifter, as the Lions came out gunning in the second half and opened up a 16-point lead which they took into the fourth. Max Michelon, senior, continued his effectiveness after being the sole bright spot in their 19-point loss to Lake Oswego. He scored six points in the third quarter to help expand the lead.

However, it wasn’t over. Fueled by Angeles, Tualatin made a run in the fourth, cutting the lead to single digits with two minutes left in the game.

That’s when Jalen Thompson, senior, came on to seal the deal at the free throw line, sinking five out of five down the stretch to keep the game just out of Tualatin’s reach.

“It was a little scary when they started to come back,” Thompson said. “But we just had to keep playing our game and make our free throws, and we did.”

Drayton Caoile, junior, also made three free throws in the final period. Caoile took a hard shot to the face late in the fourth quarter and exited the game momentarily before returning.

The Lions held on to secure the win by seven points, 83-76. They improved to 8-3 in TRL conference play, but more importantly kept themselves in the eighth spot in the OSAA state rankings. The top eight teams in the rankings get home-court advantage throughout the preliminary rounds of the state playoffs.

Angeles finished the game with an impressive season-high 40 points.

Along with Garrett, Thompson and Crockett each finished with 17 points to round out the scoring for the Lions. Damiko Tidmore, sophomore, added 13 rebounds.

“When Keishon went out, everyone started writing us off. Our guys take it personally, our guys read the paper and OregonLive. We have really great players. We’re not going to be an easy out,” Toney said.