Both teams tread in uncharted waters prior to playoff matinee 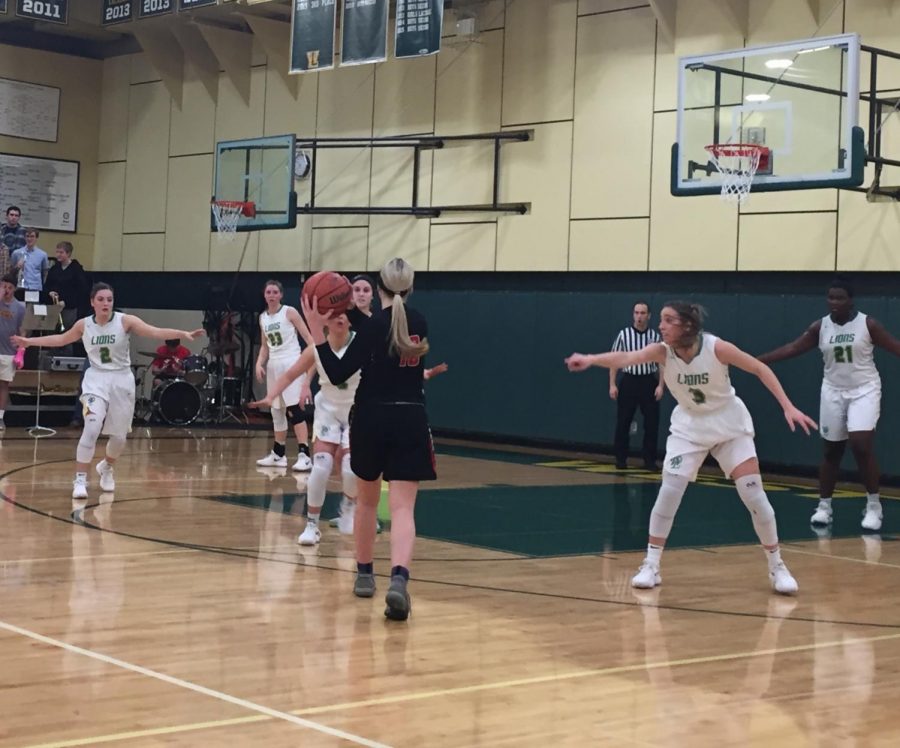 Lexie Pritchard communicates to her teammates on defense during the Lions' playoff game versus Oregon City. Communication on defense will be a key versus North Medford.

Two girls basketball programs with similar storylines, the No. 4 West Linn Lions (23-3, 14-2 Three Rivers League) and the No. 5 North Medford Black Tornadoes (18-8, 10-2 Southwest Conference), will collide in the third round of the OSAA state playoffs Wednesday.

The Lions hadn’t made it to the state tournament since 2012, prior to the debut of the Big Three: Seniors Kennedi Byram, Lexie Pritchard and Brooke Landis. Those three were finishing up their first year of middle school at the time, sixth graders in the West Linn-Wilsonville School District.

This year, they finally got over the second round hump with a 43-39 win over rival Oregon City. Byram led the way for West Linn with 16 points in a game where every second counted. Literally.

Seemingly a one possession game until the very end, the officials added tenths of seconds onto the clock multiple times during the final stages of the game following fouls and a tipped inbounds pass to ensure that no time was lost for either team.

Finally, after a minute that seemed to take ten came to a close and the clock hit triple zero, the Lions had broken through the second round barrier.

“This win feels really good. Getting past the second round feels great,” Pritchard said. “But we aren’t done. We still have a lot of work to do.”

That work will begin on Mar. 6.

Their first opponent will be making the five hour trek up Interstate 5 to the Chiles Center from southern Oregon. The Black Tornadoes hadn’t advanced to the state tournament since 2008, a ten year drought, prior to blowing out Central Catholic on Mar. 2. Megan Fossen, senior, scored 21 of her 25 points in the second half of that game, propelling her team to a 62-34 victory.

Fossen, a 5’10 post who earned the Southwest Conference’s co-Player of the Year award, has averaged a double-double this season and will be the player that Pritchard & company will have to contain if they are to advance to the semis.

“She is the real deal,” West Linn head coach Jared Curtiss said of Fossen. “North Medford is ranked number five for a reason.”

This season, Curtiss’ team is led in points by Aaronette Vonleh, freshman, who puts up 14.9 per contest. Vonleh also leads the team in rebounds with 4.9 per game. Pritchard, Byram and Landis round out the scoring for the Lions, each picking up more than eight points per game. Makayla Long, freshman, is close behind Vonleh in rebounds, averaging 4.6.

In terms of their matchup versus the fifth-ranked Black Tornadoes, Curtiss says the contest will be a team effort for West Linn.

“The guards have to get pressure, the posts have to finish on offense and defense,” Curtiss said. “They (North Medford) go inside, they play methodically and slow. If you make a mistake early, they’ll score.”

As a result, according to Curtiss, the tempo will play a key part in the game.

“We have to be able to dictate the pace. They take shots that they want to take, we’ve got to speed them up a little bit.”

The Lions have experience with success against a team that plays at a slower pace. On Jan. 19, they played their lowest scoring game of the season versus the Sherwood Bowmen, escaping Sherwood High with a 24-23 victory.  When facing the Bowmen for the second time, however, West Linn was able to control the tempo from the getgo, dominating Sherwood the entire way on Feb. 16 enroute to a 57-37 senior night victory.

“We’re confident that if we run the floor we can get up and down and get lay ins,” Byram, who had 11 points in the second contest versus Sherwood, said.

The victor will advance to the state semifinals to take on either top-ranked Southridge or No. 9 Clackamas on Friday.

West Linn is set to tipoff versus North Medford at 3:15pm at the Chiles Center.