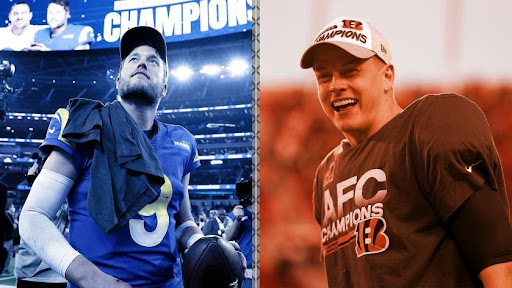 Quarterbacks Matthew Stafford (left) and Joe Burrow (right) look to complete their teams’ title runs in Super Bowl LVI after dismantling the 49ers and the Chiefs in the championship round.

Last year’s Super Bowl averaged 91.63 million viewers across the U.S. To put that in perspective, the 2021 Summer Olympics’ opening ceremony averaged 16.7 millions U.S viewers. Super Bowl Sunday has been a marquee date on the American calendar, whether you’re  an NFL fan or not. Nine Super Bowls from the last decade rank in the top 10 most watched broadcasts in all of U.S television history. In 2015, Super Bowl XLIX set U.S television records by averaging 144.44 U.S viewers. To say the least, the Super Bowl is a major event for Americans. This years’ Super Bowl is set in Inglewood, Calif., which premieres on Feb. 13 and is the richest and possibly the most gratifying yet.
Key points to the matchup of Bengals-Rams
In a season where each team, besides the Jacksonville Jaguars, had a decent shot at the postseason. The season’s finale is an unexpected matchup, which was expected. In a postseason where there were eight games decided by one possession, the big game has yet another expectation— a close game. Both teams have playmakers
The secondary receivers
Both teams have clearcut number one receivers, Ja’marr Chase of Cincinnati and Cooper Kupp of Los Angeles. Kupp has amassed 385 receiving yards in the postseason while Chase has grabbed 279 receiving yards on 20 catches. However, both players are likely going to be double-teamed throughout the game. This means that the passing game will have more weight on the secondary receivers like Los Angeles’ Odell Beckham Jr. and Cincinnati’s Tee Higgins. Both Higgins and Beckham got at least 100 yards in the championship round when Chase and Kupp were consistently getting shadowed by another safety.
The pass rush
After dominating Tampa Bay’s offensive line in the second round, Los Angeles’ pass rush sputtered against San Francisco in the championship game with only seven total pressures from Ram standouts Aaron Donald and Von Miller. Cincinnati also has a pass rushing dynamo in Trey Hendrickson, who gave the Chiefs offense some trouble with a 33.3% pass rush win rate according to the PFF. Cincinnati defensive end Sam Hubbard also was clutch down the stretch, coming up with two sacks in the closing minutes of regulation in the AFC championship. However, both quarterbacks, Bengals’ Joe Burrow and Rams’ Matthew Stafford, have done incredibly well eluding the pressure. Against the Chiefs, Burrow took one sack and escaped two would-be Chris Jones sacks. Stafford has done well against the blitz and has only been sacked five times this postseason. The question fans are asking is: can the pass rush on either side hit home this week?
Underlying factor: Joe Mixon
This Cincinnati running back has been a major player most of their 13 victories this postseason and regular season. While averaging at least four yards per attempt in the game, the Bengals have gone eight and one. With Joe Mixon failing to hit this mark, the Bengals have a record of five and five. Some fans say that Zac Taylor relied too much on Mixon instead of the passing game, but Mixon was able to run for a few first downs. If Mixon and the running game can get it going consistently, that should open up Burrow’s passing game.

The Rams and Bengals have had their fair share of Super Bowl disappointment, with both teams combining for a Super Bowl record of 1-5. Which team will pull through? The Bengals, who finished 2-14 on the season just two years ago? The Rams, who are led by previously playoff-winless Stafford? Will there be a double-overtime? Anything can happen in the Super Bowl, from upsets, to flat out blowouts, to incredible performances on the stage or on the field. What will Super Bowl LVI provide? Check out on NBC to find out on Super Bowl Sunday.