Soaring into a new season 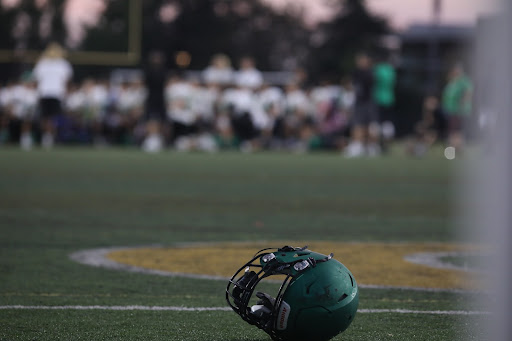 The Lions play their first home game on Sept. 8 at 7 p.m.

“Some things that work in college don’t necessarily work in high school and vice versa,” Eagle said.  “I think high school is a little more pure.”

Inheriting a team that used a run-heavy offense the previous year, Eagle has switched the offensive scheme to something that relies on passing the ball more. This is a spread scheme, which has at least three wide receivers to space out the defense.

“I think we have a very good team,” Eagle said. “We do a lot of things very well. We have a lot of very good players. I’ve been very impressed by how quickly we have learned a new system.”

This scheme helps utilize the abilities of three-star recruit Sam Leavitt, senior, and wide receiver Mark Hamper, senior. Leavitt is the starting quarterback for the Lions and the spread scheme needs a quarterback to make decisions on time.

“He processes information quickly and that’s really important for a quarterback,” Eagle said.

Leavitt played three years at Westview high school and transferred to West Linn for the 2022-23 season.

“I’m feeling great, you know, coming to a new program, you don’t know what to expect but we’ve been clicking,” Leavitt said. “I’ve made some good friends on the team and I’m just excited to see how we can produce.”

Koffi Kouame, senior, played backup running back behind Jaxon Steinhauer, West Linn alum, the previous year. Now starting running back, he has emerged as a leader for other teammates.

“No one’s gonna stop us,” Kouame said. “Everyone’s working hard and when you work hard, you always get whatever you want.”

Their scheme allows the quarterback and the running back, Leavitt and Kouame, respectively, to be together before the start of most plays. Since football is a team game, the spread scheme will not work if only Leavitt and Kouame carry the load.

“We can never underestimate [our] enemy but they’re never gonna come after us,” Kouame said. “No one’s gonna stop us this year.”

The Lions will face Lake Stevens in their first home game Sept. 8 at 7 p.m.