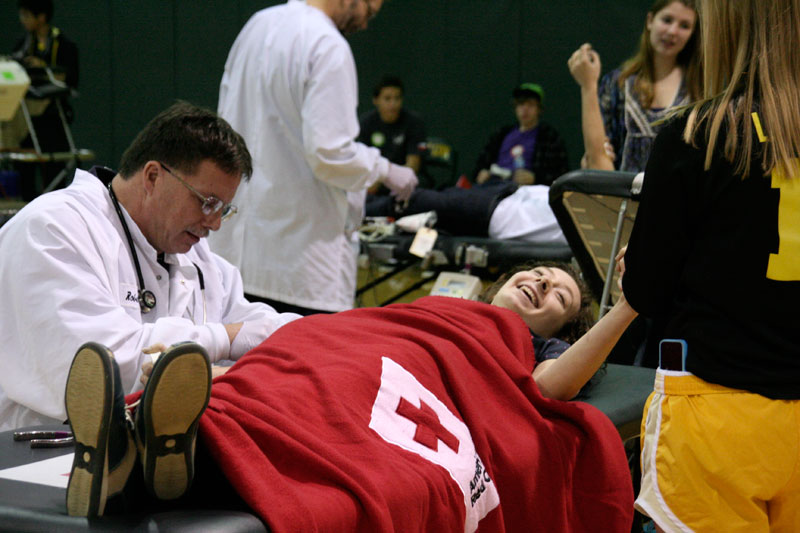 Though it started out with 23 of the 118 pre-registered students being unable to donate blood, this year’s third semi-annual blood drive proved to be successful.

“At first we didn’t have a lot of people, but they started to show up once we got started,” Jaren Breault, senior, said.

Nineteen students dropped in on the day of the drive to donate. According to Mandy Weaver, Health/Physical Education teacher, this has happened in previous years as well.

“We were still looking for people the day before and the day of,” Weaver said. “It’s typical for us to still be looking for students on the day of [the drive].”

In addition to a search for students to sign up, the medical problems associated with giving blood were also an issue. For instance, Tyler Donison, junior, had problems with blood clots during the blood drive.

“Because I didn’t drink enough fluids this morning, my body did what it was supposed to do and clotted,” Donison said. “I started having symptoms of fainting after this, and they couldn’t find any other veins, so they put me in a rest area, and I ended up not being able to give blood.”

Many of the donors were at the drive because they wanted to help others who were less fortunate than themselves.

“I thought that giving blood would be for the greater good of the community,” Jackson Peterson, junior, said. “I really just wanted to help out other people.”

The original goal of the drive was to collect 108 units of blood. In the end, 102 units were collected, 95 percent of the goal. The next blood drive will be on March 21, and according to Weaver, interested students are able to sign up now by contacting Weaver or her student volunteers.

“Looking ahead to the spring we are going to strive to fill all appointment slots instead of having so many drop ins,” Weaver said.