Wikipedia, Google and others blackout in protest to SOPA 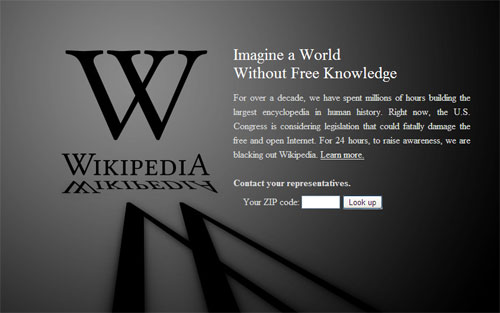 Internet hotspots Wikipedia and Google, along with numerous other websites, have shut down for 24 hours to protest the bills SOPA (Stop Online Piracy Act) and PIPA (Protect Internet Protocol Act).

While the Google search engine still works, the Google doodle is obscured by a black censor bar with a link to further information about the bills. Wikipedia, however, has blocked access to all articles until midnight Eastern Time on Jan. 18. Rather than an article, all that appears is a page urging users to oppose SOPA and PIPA and a link to look up state representatives for any location, including contacts to representatives to involve the public in protesting the bills.

SOPA and PIPA will block websites such as Google and Wikipedia, and would allow copyright holders to request court orders against websites who enable copyright infringement. YouTube, Facebook, Craigslist and many other social hotspots on the internet would generally cease to exist. Progress on passing the bill was halted in January, but according to House Judiciary Committee Chairman Lamar Smith, markup on the bills is expected to continue in February.

President Barack Obama has openly made it clear that his administration will not be supporting the bill, a sign that the SOPA protesters may win the fight. Oregon Senator Ron Wyden has lead the opposition against the SOPA bill as well.

“Nobody disputes the fact there is copyright infringement going on. But as far as I’m concerned it’s possible to cut off the money to bad actors without doing the damage to the fundamental architecture of the internet,” Wyden said. The Oregon senator is sponsoring an alternative bill which creates enforcement within the International Trade Commission.

The participants in the blackout hope to send a powerful message to internet users about how powerless people really are without the web.

Joining the blackout with Wikipedia and Google are Reddit and MoveOn.org, along with 160 other websites. Other social media sites such as Facebook and Yahoo plan to follow suit, whereas Twitter opted to stay out of the blackout, commenting that it would be a “foolish move.”