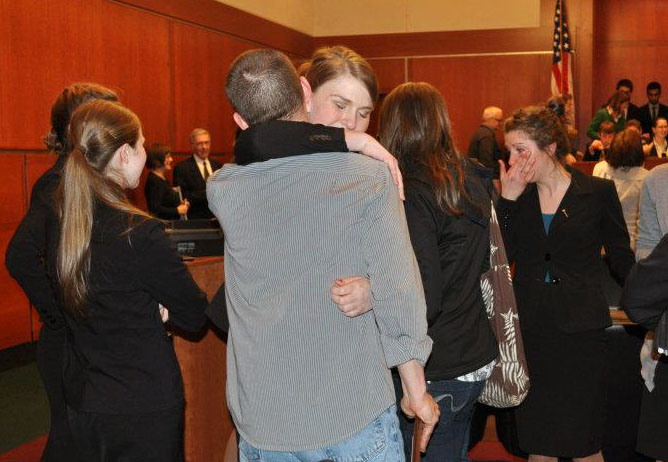 For the second year in a row, the Senior Mock Trial Team swept away the competition when it took second in State last weekend at the Federal Courthouse in Portland. Though hoping to win first, the team was still very happy with the outcome.

“We are all so proud of the final round, no matter what the outcome was,” Emily Axelrod, senior, said. “Taking second in State two years in a row means that we’re going out with a bang.”

According to Matt Kellogg, coach, though the team performed well, he thought it should have gotten first.

“Overall, I thought we did incredibly well, but we were obviously frustrated with the end result,” Kellogg said.

The state competition consisted of three trials, and an additional round for the top two teams. According to Axelrod, the team was nervous that it would not make it into the final round. When they qualified and faced off against Jesuit, she was surprised that they did not take first.

“I had complete confidence in us, but I was definitely nervous that we wouldn’t get to the final round,” Axelrod said. “And it was a really close round. So honestly I was a little surprised with the outcome.”

Two of the three teams that West Linn faced prior to the finals ended up in the top four, showing the difficulty of the competition. Jesuit took first place, followed by West Linn in second, West Salem in third, and Village Home Resource Center in fourth.

According to Axelrod, the team was able to accomplish as much as it did because of attending the International Competition Empire earlier this year in New York. Kellogg agreed, and sees the New York trip as the highlight of the season.

“New York was my favorite part of the season,” Axelrod said. “It was honestly such an amazing experience, and we all improved so much.”

Over the two years that the team has been together, the members have grown very close and have developed traditions for before and after every trial, according to Axelrod.

“We always get in a huddle to just talk and pump ourselves up and stuff before a trial,” Axelrod said. “We do the same things afterwards too, and I think that it has helped us a lot.”

According to Kellogg, the goal for next year is domination.