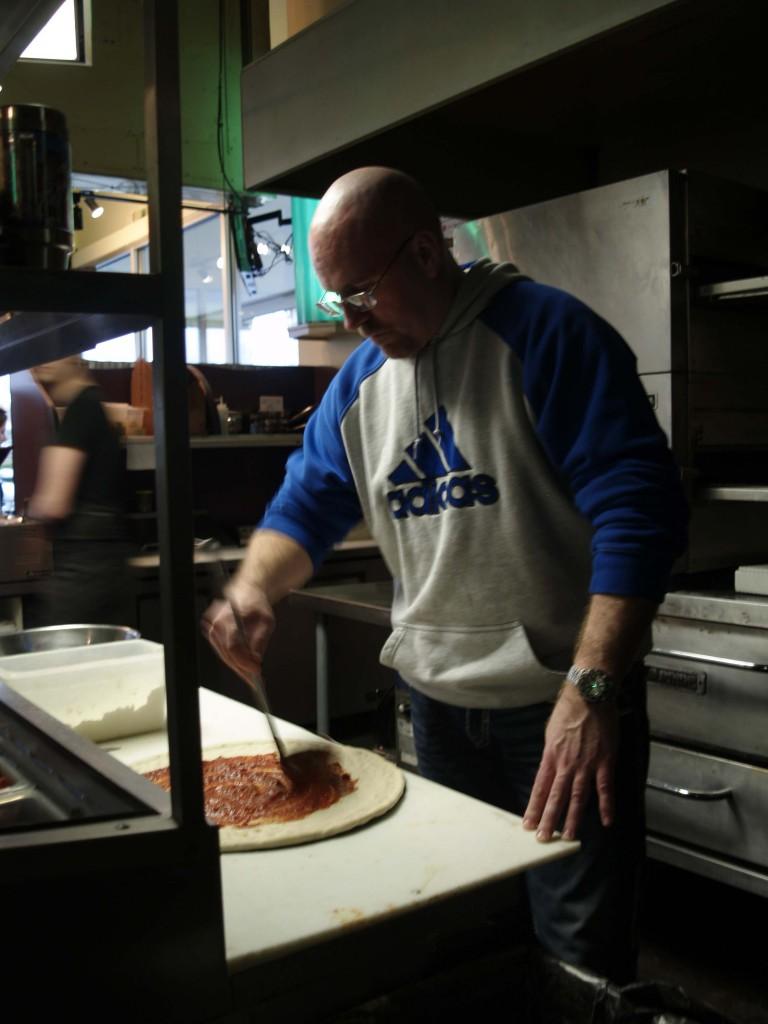 The building stood in futile anticipation, deserted after months of sluggish activity. It seemed as if there was no hope for this ailing establishment, until the right man decided to take a gamble on it.

“I came up here the day after it was closed and I saw the “For Lease” sign. I made contact with the leasing agent and he and I had a great conversation over the phone,” Lee Gamble, co-owner of “Mean Street Pizza”, said. “He liked the motivation and direction I was going in, so all that was left to do was for me to get my ducks in a row.”

“Mean Street Pizza” officially opened on Wed. March 18. It took the place of the former Pizza Schmizza, which closed its doors on Jan. 14 after a few months of declining business. The idea behind the New York-style restaurant came from Gamble, but the funding came from his good friend and co-owner Chael Sonnen, who is known worldwide as a professional UFC fighter.

“Chael and I are equal partners. I basically brought the idea to him and he funded it,” Gamble said. “We have been good friends for a couple years now.”

Gamble gave Sonnen the call after becoming interested in the location. Although Sonnen was busy preparing for a fight, he jumped at the opportunity.

“I was in Chicago for a fight and I got a call. I’ve always liked the place and didn’t want to see it close,” Sonnen said. “It will be the same concept with an addition of a few menu items and video games.”

The pizza parlor will focus on a more local touch than its previous counterpart. Gamble also stresses that all of the food used in the restaurant will be prepared fresh every day.

“The menu is based on a New York-style recipe that I discovered,” Gamble said. “We use a local flour brand called Bob’s Bread Mill. All the sauces we use are fresh, all the meats and veggies are fresh, and all other ingredients are prepared fresh.”

The store was originally planned to be called “Slices”, but Sonnen decided that “Mean Street Pizza” fit the vibe of the restaurant, and his life, more effectively.

“Chael has kind of been the character in all of this,” Gamble said. “His take on the restaurant is that he was raised in the mean streets of West Linn.”

The eatery is committed to becoming a vital component of the West Linn community. They will be setting up discount deals for students who bring in school ID cards, and they hope to supply pizza to the snack shack for all sporting events. They also encourage anyone to donate old sports memorabilia to be hung in the store for decoration.

“We have a new staff with the same manager,” Sonnen said. “Come try the best pizza around!”

“Mean Street Pizza” is also looking for anyone matching their qualifications to fill the vacant managerial position. The Craigslist posting can be found here.