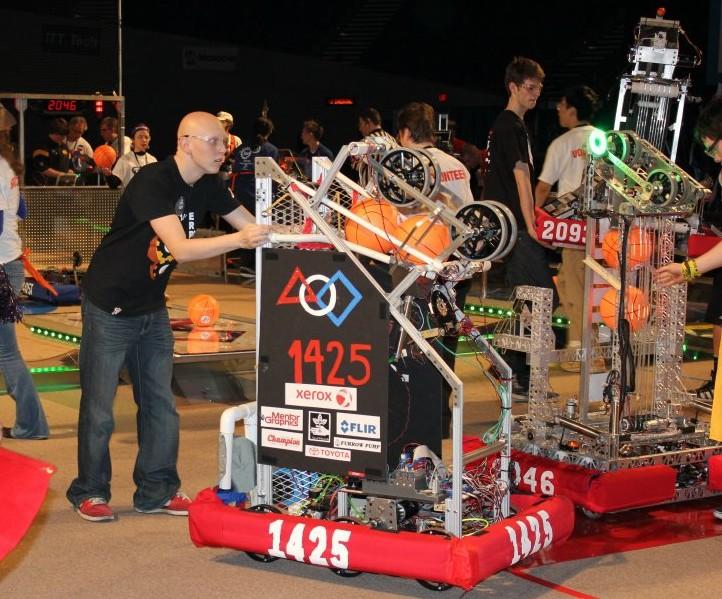 With only five seconds left on the clock, the members of Error Code Xero, a combined West Linn and Wilsonville High School team, held their breaths as they watched their opponent, Skunkworks, attempt to make its final basket.

When time was called, the final score read 68-67. Error Code Xero, which partnered up with two Washington schools, Tacoma School of Arts and Ballard High School, was awarded first place at the Seattle Olympic Regional.

“Not a single person there thought we were going to win,” Rachel Nelke, senior, said. “Now we’re really well-known in the Robotics world. People are talking about us on the forums.”

The competition began on March 22, with advancing teams competing until March 24. Error Code Xero’s robot beat two nationally ranked robots that were also entered in the competition. In addition to earning two trophies and individual medals, the team also qualified for the World Championship. Members also met the creator of the competition, Dean Kamen, who also invented the Segway.

“It’s pretty unreal,” Pascale Patterson, junior, said. “You don’t realize how big it is until you’re there.”

In a Robotics competition, teams form “alliances” with other teams. They work together in specific subgroups to design three robots. The robots then compete by shooting basketballs into hoops or balancing on bridges, which are teeter-totter-like structures. The rounds last for two minutes and 15 seconds, but the robot must operate by itself during the first 15 seconds. After that, the team can control the robot.

“One of the best parts is that even though you’re in a competition, everyone cheers for everyone. Teams help each other out,” Patterson said.

Patterson and Nelke were part of the electrical sub-team that “does all the wiring” of the robot. They also created decorative blinking lights that earned their robot the Imagery Award for its artistic appeal.

“It has these two pneumatic actuators that shoot down and help balance on the bridges,” Patterson said.