Penn State tries to move on 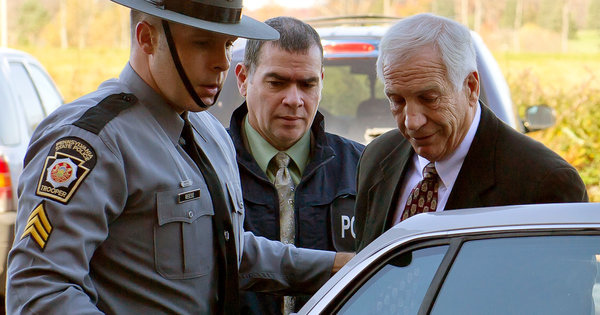 In a corner outside Beaver stadium, home of the Penn State Nittany Lions Football team, the famed Joe Paterno statue is now gone. The statue depicted Paterno leading four football players onto the gridiron with Paterno’s arm raised to represent “Number One.”

Paterno’s reputation along with his statue collapsed, due to the scandal in 1998, the alleged year Jerry Sandusky began abusing young boys. In response, the National Collegiate Athletic Association, NCAA, lead by Mark Emmert, handed down unprecedented punishments to the Penn State Football Team. They are now ineligible to play in a bowl game for four years, are fined 60 million dollars, receive a loss of scholarships and all wins dating back to 1998 have been vacated.

Along with the NCAA punishments, players were allowed to transfer to any school of their choosing, without having to sit out a year. Players including Silas Redd, junior running back, Khairi Fortt, junior linebacker, and Rob Bolden, sophomore quarterback transferred to the University of Southern California, University of California and Louisiana State University, respectively.

The Penn State community is still trying to recover from these crushing losses and attempting to grasp exactly what happened on their campus. The Louis Freeh Report, an investigation into Penn State led by Louis Freeh former FBI director, concluded Paterno and other staff members withheld critical information related to the Sandusky sexual abuse case.

“This is shattering for the community around Penn State. Joe Paterno didn’t do all he could have done to help,” Ken Goe, Oregonian Sports writer, said. “Coaches today are put on a pedestal and people are unwilling to look at their flaws.”

A janitor working at Penn State witnessed Sandusky abusing a young boy and was reluctant to tell anyone, not because he wanted to uphold the university’s integrity, but because he feared if he told anyone, he would be fired. “The potential for coaches to abuse power is there. It’s realistic that coaches are more powerful than the people who employ them,” Goe said.

In past years, the NCAA has done little to punish large schools for breaking the rules. In a recent case, though, they banned the University of Southern California Football Team from a bowl game for two years, when they discovered former Heisman Trophy Winner, Reggie Bush, received impermissible benefits from USC. Other than that, they seem to be under constant investigation of random schools, yet don’t seem to come to a resolution.

In the case of Penn State however, the NCAA response seemed to meet what many people believed to be the right punishment “I think what the NCAA did was good. I think schools now should be worried about breaking the rules since the NCAA is taking action against that,” Evan Parrish, sophomore, said.

Many debate about whether or not the punishments were too lenient, too much, or just right. “Penn State should have received the death penalty,” which is shutting down an athletic program for at least one year, “because the severity of what Sandusky did and because Joe Paterno and other staff members failed to tell anyone what happened,” Parrish said.

“Something had to be done,” Goe said, “It was a huge image problem for the NCAA and they needed to take action.” Not only will Penn State receive those punishments, but civil cases will be brought to court regarding the families affected by Sandusky.

Penn State University and the community will be reeling in the years to come. When people think of Paterno, they used to think of an honorable man and the winningest coach in the history of college football. He won two national championships, and coached the Heisman winning running back, John Cappelletti. “Success with honor,” was Paternos saying, but now that action is forever marred.  What happened will never be forgotten, and a once honorable university is now tarnished forever.