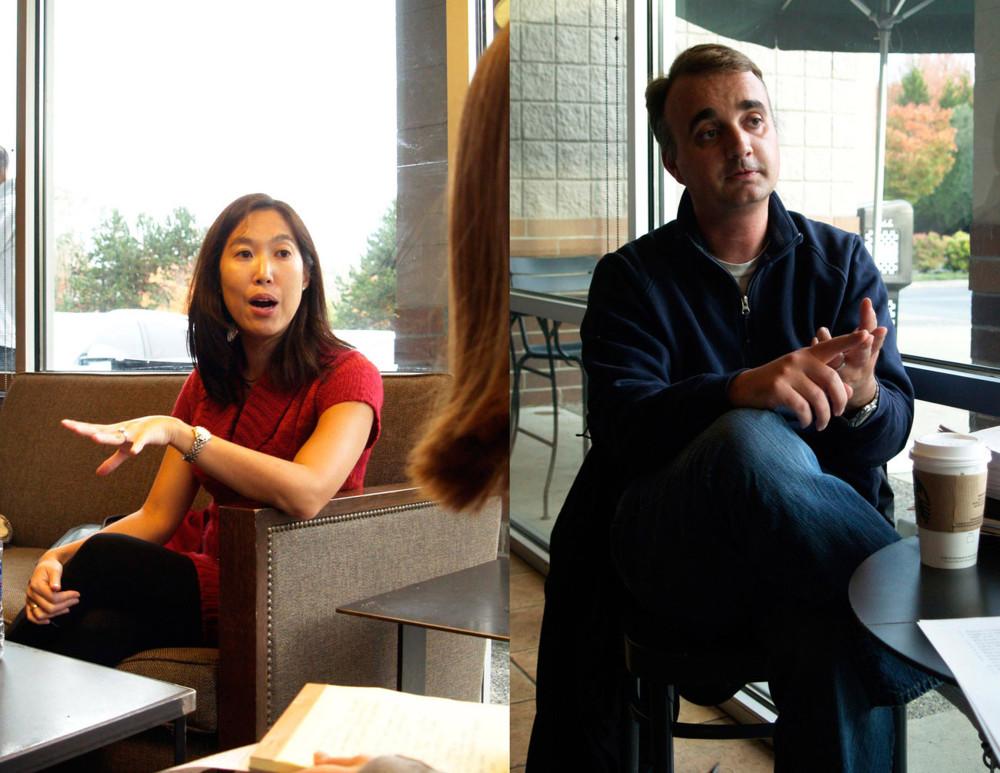 Jenni Tan, city councilor, and Thomas Frank, running candidate, sit and talk with reporters about the current situation of West Linn as well as future plans.

Why should I care: The city council teams up  with the mayor to establish city policies, determine land use, enact city codes and work with community groups. City councilors propose bills, hold votes and pass laws to help govern the city. They work together to improve areas of the city which are critical to the well-being of its citizens.

With only one day until national elections, the City of West Linn is preparing for its own election: city council members. This year’s running candidates are Jenni Tan, a current city councilor, Thomas Frank, a running member, and Ben Egland, a write-in candidate.

Frank, 35, who has been in West Linn since 2004, aims to concentrate on improving the city’s infrastructure. He also wants to work on the city’s economic growth and development. West Linn has lost many small businesses during the “great recession.” Frank’s goal is to bring in new businesses and help strengthen existing ones.

Tan, 38, who has lived in West Linn for over five years, also looks to improve economic development and financial sustainability. She aims to help businesses be successful in order for the city to be “financially sound for the future.”

Another concern that both Frank and Tan address is the city’s water pipes. Some of these pipes are in fair or poor condition, especially ones in the older parts of West Linn, such as Robinwood, Bolton, Sunset and Willamette.

West Linn’s lack of sidewalks for people’s safety is an issue that Frank primarily addresses. An area such as Skyline Drive to the high school is one that Frank is concerned about. All these issues contribute to Frank’s attention to a potentially improved infrastructure.

“When you live in a city, certain expectations need to be met,” Frank said. “Once that process is done, then we get the city moving in a positive direction on bigger issues.”

Alongside Frank’s priorities, Tan agrees that the main focus of this city is its infrastructure. Ensuring a stable city for families, Tan wants “kids to have a great place to live in.”

Both Frank and Tan mention the possibility of an aquatic center for the city. Tan focuses more on this opportunity.

“I want to give people the opportunity to vote for the pool,” Tan said.

“There’s the question of ‘What other sources are there?’ How can we reduce costs?” Tan said.

As an involved member of the community, Tan ran for City Council in 2010 to make a positive difference at the city government level.

Tan possess a positive vision for West Linn, working together with Frank to improve the quality of the city in order to satisfy the citizens.

“I want to have a positive impact on the community,” Tan said. “I want to focus on the present. Then we’ll see where life takes us from there.”

For their next terms, Frank and Tan have done outreaches through supporters, op-eds and websites. Tan’s children have also helped her, handing out flyers to people during events. Visit her website at www.jennitan.com and her Facebook page at Jenni4OR. Frank has set up ads and also met with community groups. Visit his website at www.Thomas4WestLinn.com and his Facebook page at Thomas Frank For West Linn Council.