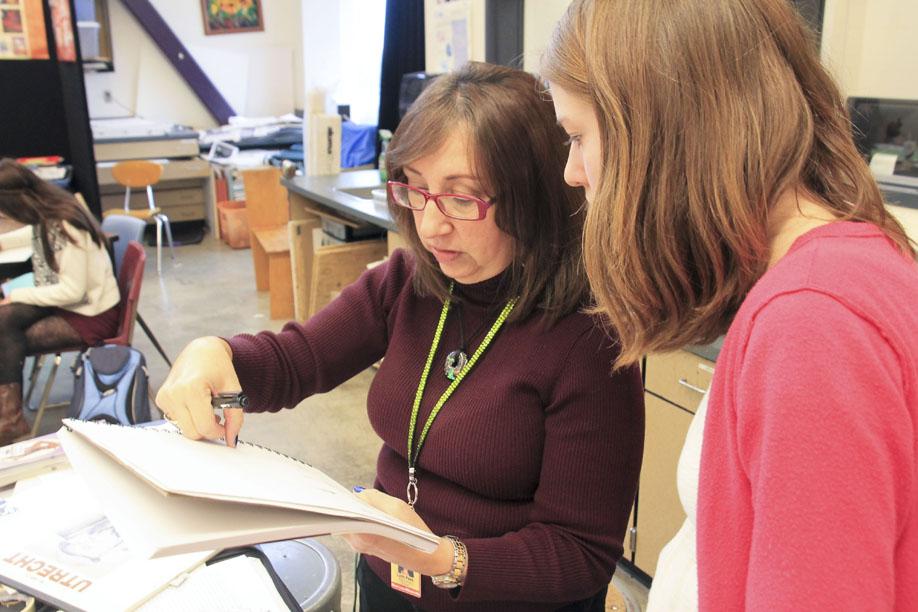 After teaching at WLHS for 21 years, Lynn Pass, fine arts teacher, has announced her retirement. Next year, Pass will be working on her own art in her home studio and spending time with her friends and family.

“It just felt right,” Pass said. “And [I] have the energy for it, but I’m 58 and life goes by pretty quickly.”
Pass currently teaches a plethora of art classes, including Art 1, Art 4, Graphic Arts 1, 2 and 3 and Advanced Placement Studio Art. Before WLHS, she taught art at Bolton from 1990 to 1992 when it was still a middle school.

After traveling between North Carolina, Florida and Ohio, Pass arrived in West Linn in 1987. Pass’s husband, Dave, who she met in Indiana, is a physician. Earlier, they jumped between states for him to catch up on his medical studies, including medical school in Florida. Pass became a child life specialist at the Cleveland Clinic in Ohio, where she was able to do art and play therapy with children with cancer and blood diseases.

One day, a friend called her and suggested that “they would love this state.” So she and her family of four, including her daughters Rachel and Sarah, began to look at local communities.

“We heard wonderful things about West Linn’s schools, and that’s why we moved here,” Pass said. Pass’s daughters graduated from WLHS in 2001 and 2005, respectively.

For Pass, her ambition to teach started when she used to “play” teacher as a little girl. She attended Indiana University for her undergraduate in art and later attended Ohio State University to study family relations and human development. Her favorite part about teaching is sharing something that she loves to do and values so much with the people who she cares about.

Pass wanted to find an art teaching job, a job where she could work with art and with children, but the lack of such jobs drove her to find this job as a child life specialist. The job “just kinda fell into my lap,” she said. When Pass was applying for the job she was asked, “How would you treat them [the kids] differently?” She responded, “I wouldn’t,” and landed the position.

Once Pass retires, she intends on traveling in her Airstream trailer with her husband, volunteering at a retirement center and doing her own art. She is also considering volunteering in places where she can use her experience in art and play therapy.

Having incorporated art into her past jobs as a child life specialist and art teacher, Pass believes that art is an essential to human beings and that it helps people express themselves.

“It’s valuable and it’s another way we express ourselves,” Pass said. “Some people are good with words, or speaking, but making something with your hands and your heart is another way.”

Students who have experienced Pass’s art philosophy also share their sadness in her retirement.

“I’ll miss her positive energy,” Emeric Kennard, senior, said. “She is such a kind, supportive, accepting person, and she’s become a good friend to me.”

Pass will miss everyone that is associated with the school, including her students, as she will miss their day-to-day interactions. After staying with WLHS for the past  21 years, Pass will miss helping students find the artist that she knows they have within themselves, as she says that with all her friends here, it feels like her “work family.”

“I think what stands out to me is how, in fun times and in times of challenge, we as a family pull together,” Pass said.