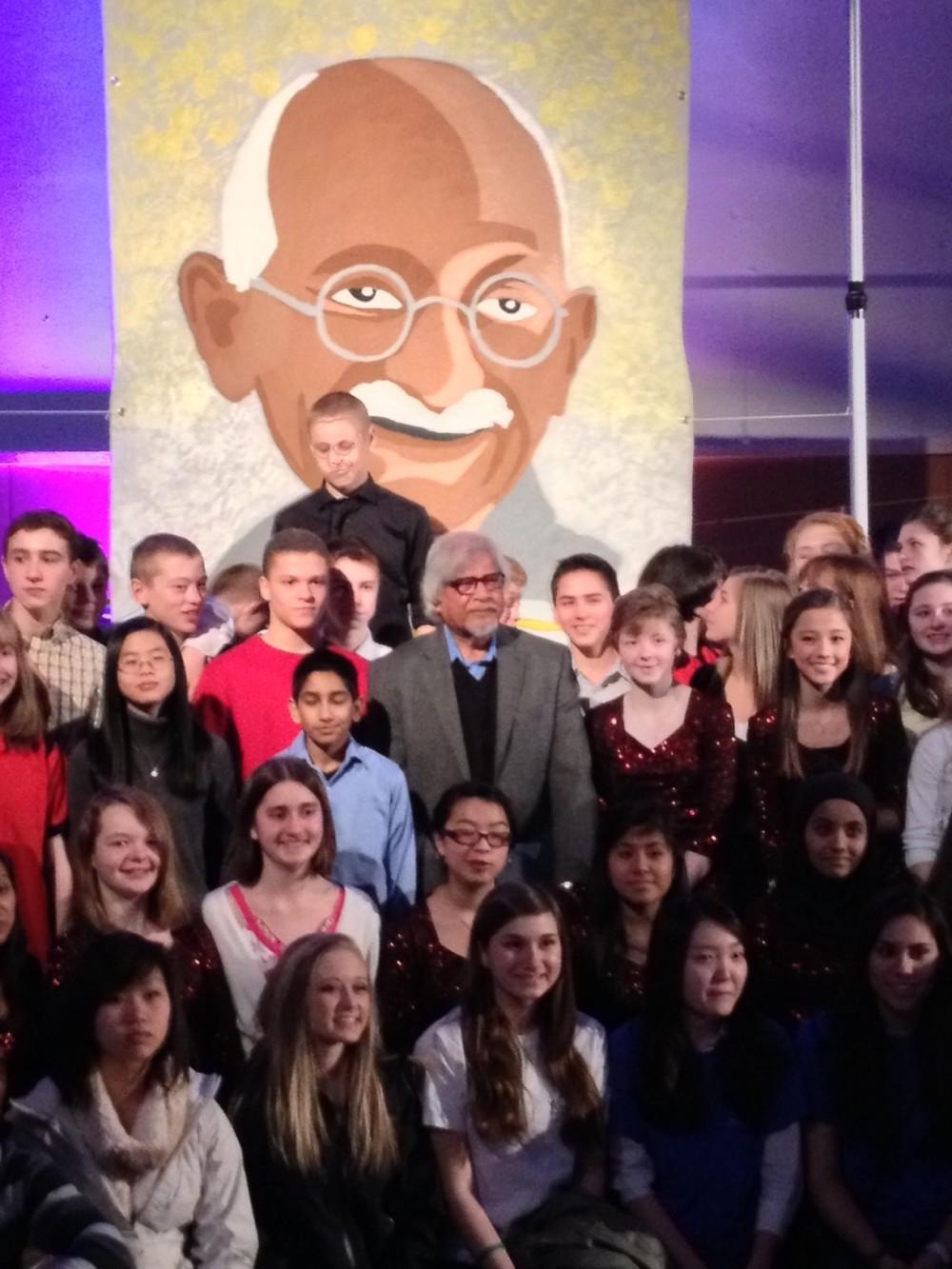 Arun Gandhi, Mahatma Gandhi’s grandson, spread his message of peace at Athey Creek Middle School on Feb. 25. He emphasized how each person can play a part in creating a more peaceful world.

“The first thing we have to do is learn about anger and channel that anger,” Gandhi said. He encouraged using the anger that we gather day-to-day as motivation.

This is a message that Gandhi himself used. When he was younger, he was beaten up almost on a daily basis.

“I was too white for the black kids, and too black for the white kids,” Gandhi said. “It filled me with a lot of rage. I wanted to fight back.”

He learned to channel this anger after his grandfather, who was known for spreading peace, told him that we should not retaliate. By fighting back, we are allowing others to navigate our lives.  “We should not give the opportunity to someone else to determine the course of our lives,” Gandhi said. “Our lives are our lives to lead.”

Gandhi’s entire speech revolved around lessons that he learned from his grandfather. He lived with him for a portion of his life, and Gandhi said that he learned a considerable amount from him.

One of the things that his grandfather had him do was to draw a tree of violence on the wall. The trunk of the tree was violence, and off of this stemmed two types of violence: physical and passive. From these two branches, Gandhi would draw and write in every act of violence that occurred during the day whether it be physical (visible) or passive (internal).

“Before long, I had filled up the entire tree with acts of both violences, especially passive,” Gandhi said. This showed him the form that most of the violence in the world took.

Gandhi has gathered motivation from his surroundings as well. One time, he was on a train in Africa, and a small child came up to him. The boy tugged on his trousers and asked him to buy some of his candy that he was selling. Gandhi learned that this boy’s parents had given their children a bucket of candy, and they had to sell all of it in order to have food at the end of the day. The sun was soon to set, and the boy had a bucket still have full with candy.

This occurrence prompted Gandhi to wonder: “How can this happen in the 21st century?” He knew that he could buy the boy’s candy, but this would only benefit him for that day. Gandhi wanted to do more.

Gandhi now works with the Wholistic Peace Institute which uses funds to help children receive education. Gandhi’s hope is that children will no longer be placed in positions like the boy on the train. For more information on this, visit http://www.wholisticpeaceinstitute.com.

Gandhi went to ACMS to spread this message and to show the students what they can do. He left spreading a message to them of hope.

“All you can do is be a peace farmer and go out and plant seeds in the minds of people,” Gandhi said. “Then, you hope and pray that these seeds will germinate, and these people will become peacemakers.”