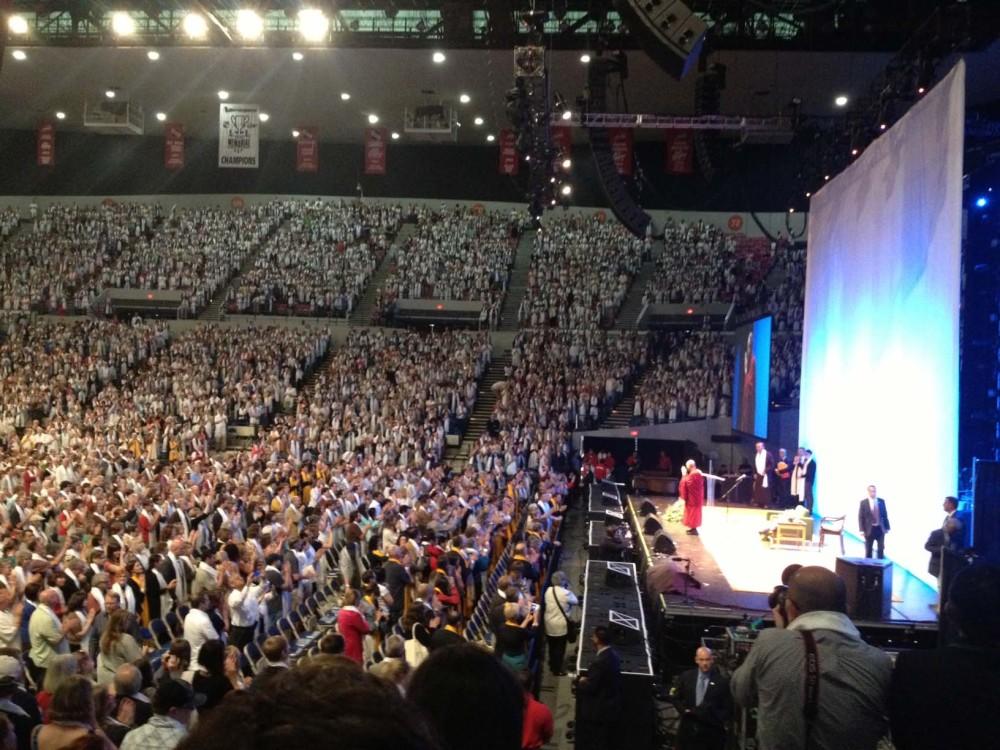 Buddhism and Rock and Roll are generally not thought of as going together, but last Saturday, the two were married perfectly. On May 11, His Holiness the Dalai Lama spoke at Memorial Coliseum, and his lecture was followed by the musical entertainment of the Red Hot Chili Peppers.

The day-long event began with a panel on climate change. His Holiness was accompanied by David Suzuki, Andrea Durbin, scientists specializing in the environment, and Governor John Kitzhaber. The group of four debated on ways to remedy the current global crisis.

One of the main topics of this discussion was the new fact that the carbon dioxide measurements in the atmosphere reached 400 parts per million the previous day. The four all agreed on one point: the source of the problem is us.

This panel was followed by a short break after which the Dalai Lama spoke by himself. The topic of this lecture was compassion; he posited the idea that internal happiness cannot be found through external goods but rather from the inside of oneself.

Following this, everyone was provided with a white scarf. These scarves bring happiness, and the white represents purity. They were all held in the air at the end, by all 11,000 spectators, in honor of His Holiness.

The entire event was a spiritual journey. The Dalai Lama’s laugh exuded so much happiness and peace that not a soul in the venue could escape it. Following this spiritual experience, however, was an entirely different mood.

The Red Hot Chili Peppers came onstage and immediately blasted their rock music, which resounded loudly throughout the entire coliseum. Though the energy was much different than that provided by His Holiness, the two somehow complimented each other. The peace which was given by the Dalai Lama allowed for all to enjoy the music and feel happiness through that.