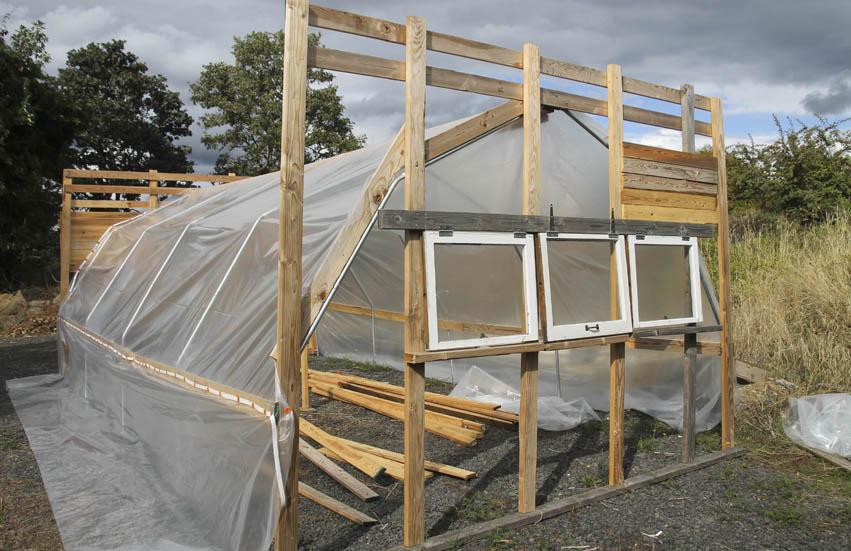 Students may have noticed changes in the building at West Linn High School, such as the glass walls enclosing the F-lab, there are also changes that have been made outside of the main building.

On the side of the Tripp Lot, which is located at the southernmost end of the school campus, a greenhouse was assembled this summer.  It has been the project of several Class of 2013 seniors: Marley Young, Bailey Middleton, Emily McDonald, Shelby Roell and Nora Hand.  Its maintenance and use will be continued through environmental science classes.

“Nora Hand and I spent about three months putting together the greenhouse itself,” Young said.  “We leveled the ground and pulled weeds.  [Our teachers] were awesome at helping us.  Without them, the project would have never been done.  The structure is called a ‘Hoop House’ and we altered the plans to suit the materials we materials we had.”

The environmental science department, composed of teachers Jim Hartmann and Geoff Bingham, is expanding to include more hands-on work around propagation (using a variety of sources to create new plants) and permaculture.  Permaculture, as described by Bingham, is “the fastest way, as human beings, to become sustainable.”  The foundation of permaculture is to conduct an agricultural system without depleting nature’s resources.  The greenhouse is meant to aid in the transition of adding permaculture to environmental science curriculum.

In addition, the greenhouse is part of a restoration effort to restore the Tripp lot area.  Such efforts also include removing blackberries and other weeds to preserve native plants and to create a trail system.

“We’ll give the students an opportunity to not just learn what permaculture is but to begin to practice,” Bingham said.  “And the idea that this can become a demonstration for the community maybe at some point in time.  We’re taking  baby steps here.  The main idea is that it’s a demonstration and people become inspired and motivated by what’s going on.”

The greenhouse has been years in the making.  The first attempt occurred two or three years ago.  A student came up with a design for the greenhouse, yet as the department began to build the structure, it found that the design cost too much money to build.  A small, sturdy deck still remains from this project and is located near the current greenhouse.  The deck may be utilized in the new project or transformed into something else, such as a picnic area.

Some parts of the greenhouse have been donated from past students and repurposed for the greenhouse, such as the wood-framed windows in the side of the structure.  Still, more additions must be made to the existing greenhouse.

“There’s some things that we need to do out there,” Bingham said.  “We need to build some tables and whatnot.  So again, we’re in its infancy.  This will be its first year of its existence.”

“It’s important to understand that this was student-driven, which I think is important and powerful,” Bingham said.  “I might have some input here and there, but when it came down to getting the job done, it was students and not me or Jim.”

The greenhouse is meant to last for ten years, as it has soft plastic sides.  This is not as long a period as some other greenhouses built with hard plastic or even glass sides, but this is not a prime issue concerning the functionality of the structure.

“There are some challenges out on the lot,” Bingham said.  “There’s no water, which is a challenge for my [Environmental Science] class.  There’s some potential opportunities to harvest some rainwater out there.  But then again, that would be a project for them this year—to figure out how we would do that, and once we locate it, how we move it so that we’re not hauling buckets of water everywhere.”

In this endeavor, the Environmental Science Department is looking for as many workers on the project as possible.  It hopes to reach out to biology student and the school’s Green Team.
“The greenhouse is going to allow for a lot of engineering projects,” Bingham said.  “I would love to see bio using it as well, and so to construct or to build, to engineer, or to come up with a new idea and see it from start to finish.”