But the plan to reimage the waterfront has taken the form of four core values. 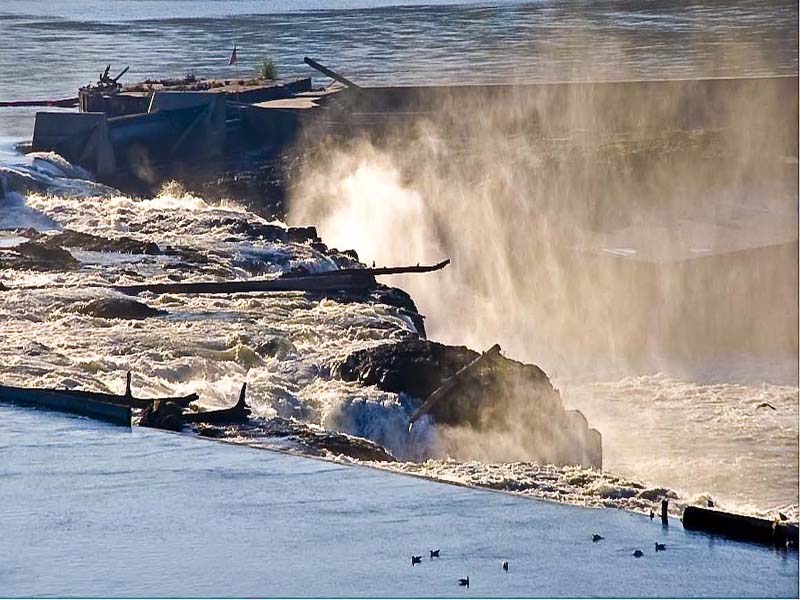 The Blue Heron Paper Mill in Oregon City closed down on Feb. 23, 2011 leaving 175 unemployed.  Since the closure, the site where the mill is based remains empty.  It wasn’t until this year that a plan the Willamette Falls Legacy Project was hatched to redevelop the paper mill.

“Once there is a master plan in place the City of Oregon City hopes to work with potential buyers to implement the master plan,” Kelly Moosbrugger, the assistant planner of the Willamette Falls Legacy Project, said.

The project will revolve around four main core values, which include public access, historic and cultural interpretation, economic redevelopment and a healthy habitat.  Unfortunately, the plan cannot be put into action until the property is bought.  It is hoped that when there is a final master plan for the site it will appease more potential buyers.

However, to develop a master plan to show possible buyers, the city is asking for community input to what should replace the paper mill. The Oregon City Commission has the final say on what the site will be developed into, but they are engaging in public hearings in which everyone is free to attend and voice their opinions.

“We want to ensure that the final plans reflect the desires of the community, so we are trying to talk to as many people as possible,” Moosbrugger said.

The master plan application is scheduled to go before the Oregon City Planning Commission on April. 24, 2014. By the summer of 2014, they expect to have adopted an official master plan according to Moosbrugger.

“By that point we may have another buyer who has come forward or at least be closer to attracting one,” Moosbrugger said.

Initially, on June. 25, the mid-level development group Eclipse, made a $4.1 million bid for the 23-acre property.  The plan was to develop the space for a mix of office, retail and residential uses, according to The Oregonian. With this purchase, it was intended to give former employees of the mill financial compensation. As of Oct. 11(the due date for finalizing the $ 4.1 million deal) the president of Eclipse stated that he was unable to raise the money because they were unable to reach a deal with a potential investment partner.

“As of now the sight is currently owned by a bankruptcy trustee who is working to find a buyer,” Moosbrugger said. “The trustee is responsible for security and maintenance of the sight.”

The long term and short-term goals of the sight are entwined. Essentially the primary goal is to incorporate the four main values discussed, such as integrate the historical background, economic development, healthy habitat and public access.

The community of Oregon City wants to provide opportunities to connect to the heritage and history of the falls.  They hope that future visitors of the sight will learn about the Native American history in the falls and also how the falls served as an important piece in the economic development of the community.  The Willamette Falls, served as a launching point for thousands of Oregonians when the city was first built around it in the 1800s.

With economic development the city hopes there will be jobs created.  When the mill is dismantled it is also hoped, that the newly developed space will reinvigorate the Oregon City waterfront has a hub of employment, shopping and business.

The removal of the mill also, presents a chance to clean the waterfront and help reestablish native plant communities that have historically thrived among the falls.

Dismemberment of the paper mill, which has cut off the people from the falls for 150 years, will provide all Oregonians a chance to connect with the river, according to Moosbrugger. The falls themselves are only second in volume to the Niagara Falls and are the second largest falls in North America.

To be involved in reimagining the Oregon City Waterfront go to rediscoverthefalls.com.