New Bridge in Portland has support of the community

Construction of the new bridge has provided thousand of jobs. 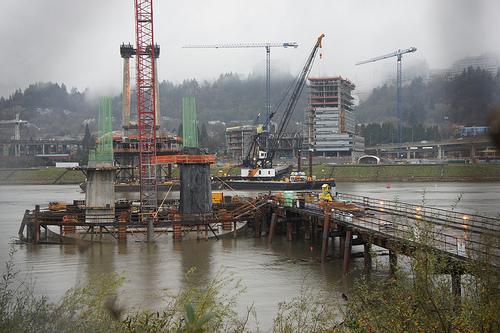 The new bridge has been under heavy construction sense 2010 and will not be completed until 2015. The job bridge has created many jobs for the community and is Americas largest car-less commuting bridge.

The Portland-Milwaukie Light Rail Transit Project will create a light rail alignment that travels 7.3 miles, connecting inner Southeast Portland, Milwaukie and North Clackamas County. It will also have economic benefits and promote sustainability according to Trimet.

The bridge is still under heavy construction and will not open until Sep. 2015.  The official name for the bridge has not been decided, but a plan has been devised for the public to conceive the name.

The bridge being constructed is considered America’s largest car-less commuting bridge, according to the Oregonian.  The project was officially announced in 2008 and is estimated to cost $1.5 billion. This will be the first bridge built over the Willamette River in 40 years.  It is to be 1,720 feet in length and has two towers on either side, which are 180 feet high each.  The typical width of the bridge is 75.5 feet. However, it will vary, as at the towers the width is 110.5 feet. The bridge also has approximately 3.5 miles of cable.  The bridge will only serve light rail trains, bikes and bus lines 9, 17 and 19, which currently travel on the Ross Island Bridge (these buses may change their full routs).

“The project will also extend the max by 60 miles,” Fetsch said. “The bridge will help extend the capacity of the MAX system and improve the travel time for riders in the area the bridge is being constructed.”

The Portland-Milwaukie Light Rail Transit Project has created many jobs since the project was announced in the summer of 2008. It has created jobs for planners, designers, engineers, construction workers and suppliers of materials for the project, such as steel, concrete, wool, etc. as of today, more than 462 private-sector firms are working, or have completed work.  Overall, 8,266 jobs have been created.

The project not only provides environmental mitigation along the alignment, but also is actively working with partners to include sustainable elements and improve habitat.  For example, project managers are working to endorse and support environmentally friendly projects.  One of the projects that have been endorsed is the restoration of shallow water habitats more specifically the South Waterfront Greenway Central District.

“The benefit to the community is that it will provide wide paths for both bicyclists and pedestrians, with the widest area of any bridge here,” Fetsch said.

The new bridge is lacking a name and Trimet has appointed a very diverse committee of local leaders to chose the name of the new bridge.

“As you may know, we’re in the process of naming the bridge and there has been tremendous excitement and interest that for the first time in the region, the public will help name a bridge,” Fetsch said.

The committee is allowing for the people of Portland to name the bridge, but they are looking for names that might reflect the local geography, Native American history and area plant or animal life. The deadline to submit a name was Dec. 1 and an official name will be selected by spring 2014.