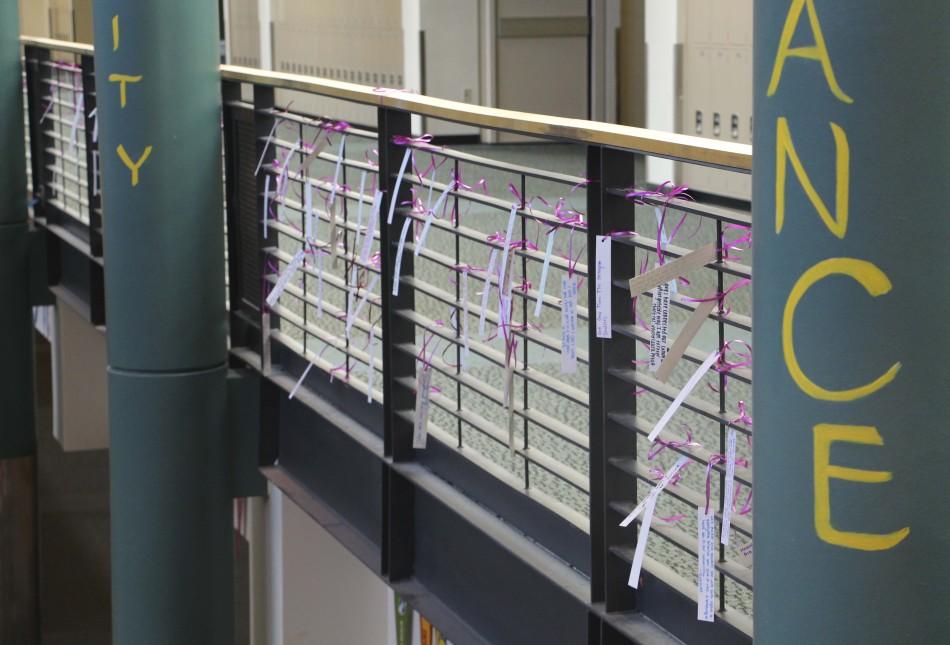 Slips of white cardstock loosely attached to segments of magenta ribbon enshrouded three tables in the library’s media center yesterday morning across from a row of black leather couches.  Students periodically rested on the couches, sharing blankets and exchanging embraces.  On the cards, students and staff alike wrote their condolences, feelings or memories using the markers and colored pencils provided, then tied the cards on the railings surrounding the media center.

In recognition of the Sunday and Monday deaths of Hayden Soyk, Class of 2013, and Madison Higgins, junior, the Associated Student Body and administration coordinated this offering.  Currently, hundreds of these cards are attached to the second-floor railings, available for all who wish to read them.

“[This] provides a real place to make a simple, powerful statement and it allows the person who’s writing it to say something meaningful,” Sheryl Wilson, counselor at Arts & Technology High School on loan to West Linn High School, said.  “I think the bigger impact is for the families, to see all the love and support.”

In addition to the cards, people can write a message of support to the Soyk and Higgins families on a poster that hangs across from the media center.

For the past three days, West Linn-Wilsonville counselors, therapy dogs and parents have been circulating in and out of the media center, which has seemingly become the main site of support.  Wilson and other counselors serve on the WLWV School District’s First Team, which quickly responds to district-wide crises, according to Jennifer Jolly, WLHS counselor.  All of the district’s counselors and additional personnel, such as counselors from private agencies, have been at WLHS.

For the last three days, students have been permitted to leave class for the media center, to be with friends or just to have time to themselves.  Likewise, the structure of final exams has been drastically altered, as administration has encouraged greater flexibility and amnesty in classrooms.

“This is a life experience for kids, and the last thing that we want is the stress of finals; however, we want to finish school,” Lou Bailey, WLHS principal, said.  “That’s the balance that we’re in right now.  Teachers have been given permission to be creative and flexible. I’d like to take the word “final” off and have a class activity, a group activity, a take-home something.  We’re in an unusual situation, and so we had better adapt to it.”