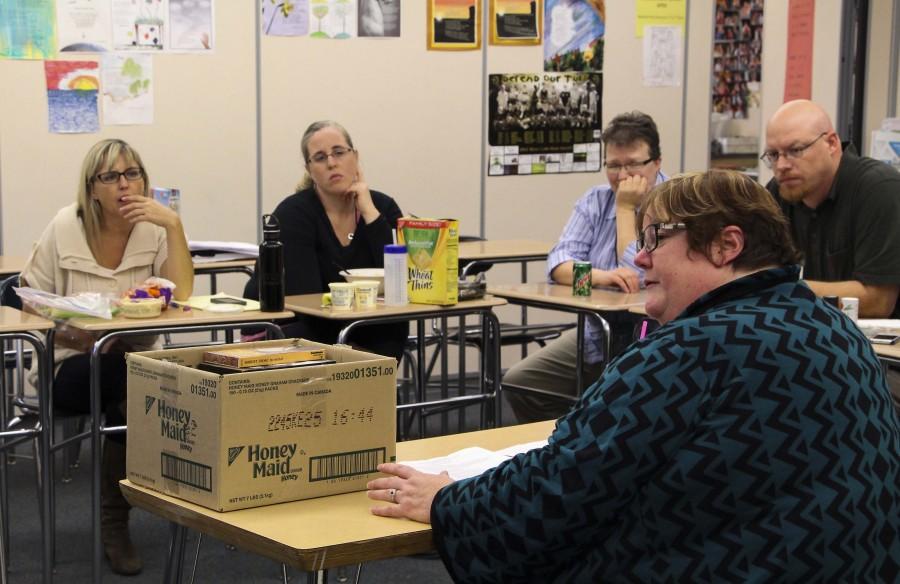 English teachers meet to discuss new changes to the WLHS’s english classes due to Common Core. These standards provided to the U.S. educational systems have affected the school in many departments.

Because WLHS is already known for having high testing scores, the standards provided by the new Common Core program will not be anything too difficult for students this spring.

Common Core, which defines curriculum standards, covers kindergarten material through grade 12 with variations of mathematics and language arts to prepare students for both college and/or work training. Its first draft was made in 2009 by teachers and various political personnel versed in the U.S. education system. The series of tests and curriculum have been adopted by 43 states to prepare kids for the tough job market they face after high school. Oregon will still be under the common testing program Oregon Assessment of Knowledge and Skills, also known as OAKS, with more emphasis on skill instead of subject matter.

“All testing will be on the computer with more prior preparation in class,” Anikke Olson, Assistant Principal and administrator for the Common Core standards, said.

The test will also have higher stakes with the option of only taking it once unlike the previous OAKS test which could be taken up to three times to pass. Despite that, the standards make the test “completely custom to the student and the student responses,” Olson said. The student’s answers for a question will determine the level of difficulty on future subject matter during testing.

“They’ve added more speaking and listening things to what we have in our curriculum already,” Marlo Mckennon, English teacher, said. These added components focus on students ability to gather information to reach objectives.

Common Core is also a check in for teachers to make sure they are giving students the vehicles to reach the standards.

“Common Core makes us much more cognizant of where in our curriculum we are meeting the requirements given,” Mckennon said.

Olson assures students that the standards don’t radically change Oregon’s previous testing grounds, “the shift that people will see from the Common Core is that students will need to work on a higher level of taxonomy,” she said. “It aligns with us quite nicely with work we’ve already been doing.” Even though the standards are the basis of what WLHS has been using for years, teachers are stilllearning more about the changes made to the district, “they are still working on developing it and even in the last month there have been changes to how they are going to administer it,” Olson said.