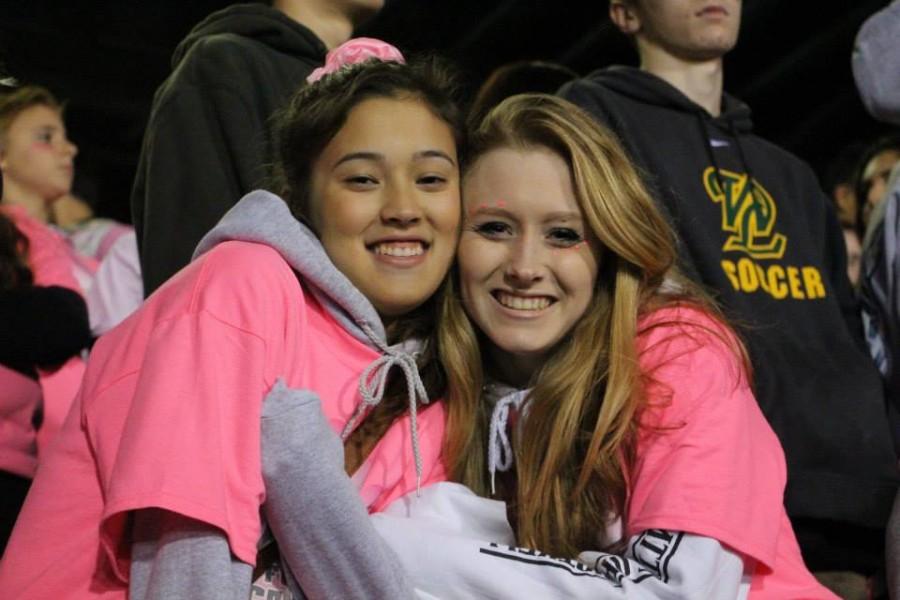 Emily Gibson and Hannah Morford, seniors, display their student spirit and sport the color pink during last week’s game against Canby. During the game, students were decked out in pink shirts, pink paw prints and other pink items to support Breast Cancer Awareness. Throughout the month of October, WLHS was engaged in a campaign to raise awareness and funds for research.

“Normally, WLHS does just a week of Breast Cancer Awareness,” McKay said. “But this year, we chose to do a month. We’ve had so many people in our community who dealt with the hardship that comes with cancer.”

According to Susan G. Komen, breast cancer is the second most common cancer for U.S. women. At least one out of eight women will be diagnosed with breast cancer at some point in her life.

One of these women is Ann Breyne, Journalism, Photography and Film teacher. “I was surprised when I was diagnosed,” Breyne said, “I had only one known risk factor. The thing about breast cancer is that almost everyone knows someone who has had it.”

An ongoing fundraiser has started. It’s called the Penny War. Four pink jars, each labeled with the class name, are available in the Media Center. Each class will try to fill its jar with pennies, which earns class points. Other grades will try to take away their points by adding quarters, dimes or nickels, which give negative points to that grade. Winners with the most points will win rights to a free scoop of ice cream at Baskin Robbins.

“Coming to the game will show support for everyone,” McKay said. “We may even have a few staff members talk about their experience with breast cancer.”