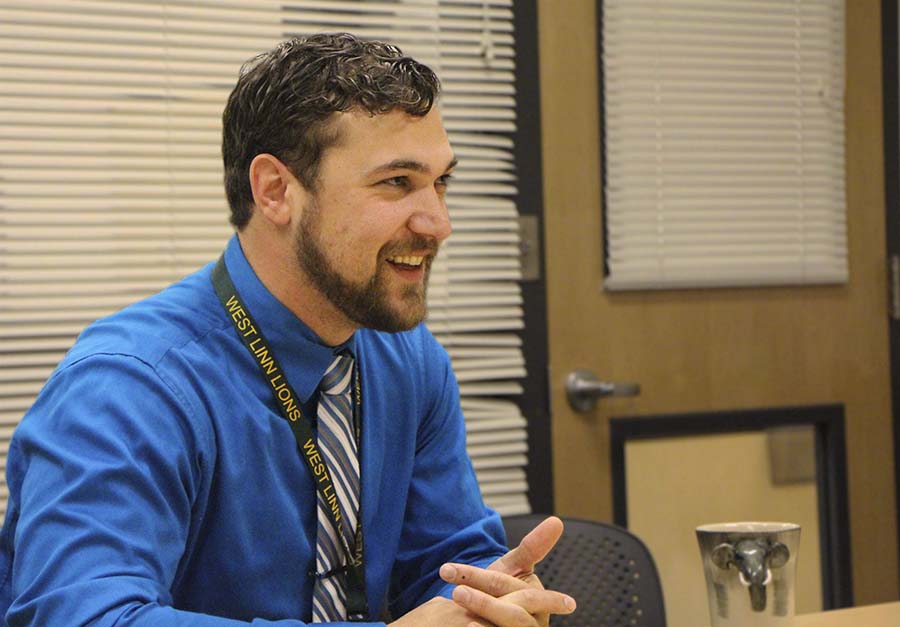 Newly named principal, Kevin Mills, was introduced to the staff this morning to take over for Lou Bailey, outgoing principal. Mills will begin as principal in July.

This morning at a  7:30 a.m. staff meeting, it was announced that Kevin Mills will be the next West Linn High School principal replacing Lou Bailey. Bailey is stepping down after seven years to take a leadership position at an international school in South Korea. Mills has also been at West Linn for seven years, first as a math teacher and last year as Athletic Director and this year as a vice principal overseeing sophomores and juniors. He looks towards Bailey as a mentor and as an example of great leadership.

“Bailey has given me advice through example,” Mills said. “He is a great mentor and somebody I look up to strongly.”

Leadership is something that is very important to Mills and he is most excited about continuing to build strong relationships with staff, students and the West Linn community. Being a teacher at West Linn before being an administrator, showed Mills how important it is to build relationships outside of the classroom.

“I genuinely care about all of my students academically and outside of the classroom. I want everyone to succeed, he said. “I hope to continue building these relationship and keep it that way.”

Before accepting the top position, Mills worked with his fellow staff to understand how they feel about the change in leadership and what they would like to see done differently next year. Students can expect to retain most of their traditions and values that they have come to expect.

“The West Linn culture is important and our traditions are a strong part of that. I don’t have a set plan on changes I want to make yet though there might be new adaptations to make them even better.”

Being in the West Linn community for almost a decade,  it is clear to Mills that West Linn is more like a family than a community. “I know West Linn Strong is a big idea at the school and it is my favorite part of the community. We stick together and act like a family,” Mills said. Mills is already a familiar face to the student body, but he hopes to know more students as individuals.

“If anyone wants to come stop by and talk to me they are more than welcome to,” Mills said.  “My position has changed, but I am still the same me. I am still Kevin Mills.”