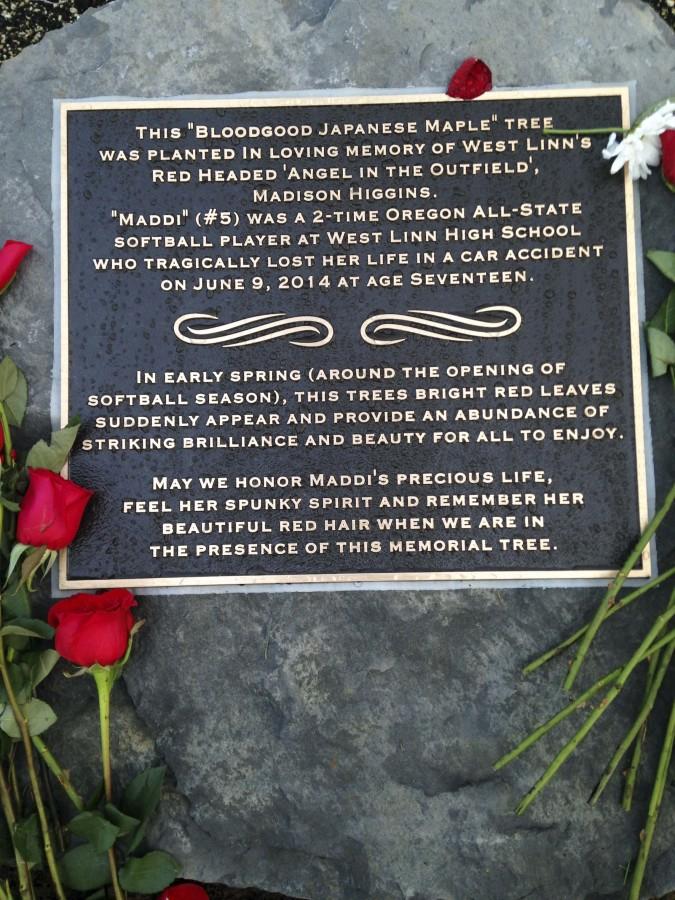 “This ‘Bloodgood Japanese Maple’ tree was planted in loving memory of West Linn’s red headed ‘angel in the outfield’, Maddie Higgins.” Higgins (#5) was a two-time Oregon all-state softball player at West Linn High School who lost her life in a car accident on June 9, 2014 when she was 17.

Dozens of friends and family joined outside the WLHS varsity softball field to celebrate the life of Maddi Higgins, who passed away due to injuries sustained in a car wreck, last Sunday on a rainy morning to unveil the plaque dedicated in her honor. Hundreds waited anxiously last June as she fought for her life.

A Japanese maple tree, which blooms a bright red in the spring, was planted right behind a memorial dedicated to Higgins. The tree, a symbol of her red hair, can be seen from the softball field as a reminder of one of West Linn’s 2014 varsity outfielders.

“The softball field was like a second home for her,” Caroline Freiling, senior, said of her former teammate. That is why it is believed that it was the best place for her memorial.

Higgins, 17, was a junior when she was involved in a car crash along SW Petes Mountain Road on June 8, 2014 along with her boyfriend, Hayden Soyk. Soyk was pronounced dead at the scene.

“The accident weighed down on the community, especially her family,” Freiling said, after Higgins also lost her life while being treated at Legacy Emanuel Medical Center.

“Her competitive spirit was probably her best trait,” Freiling said. “She would never give up on anything.”