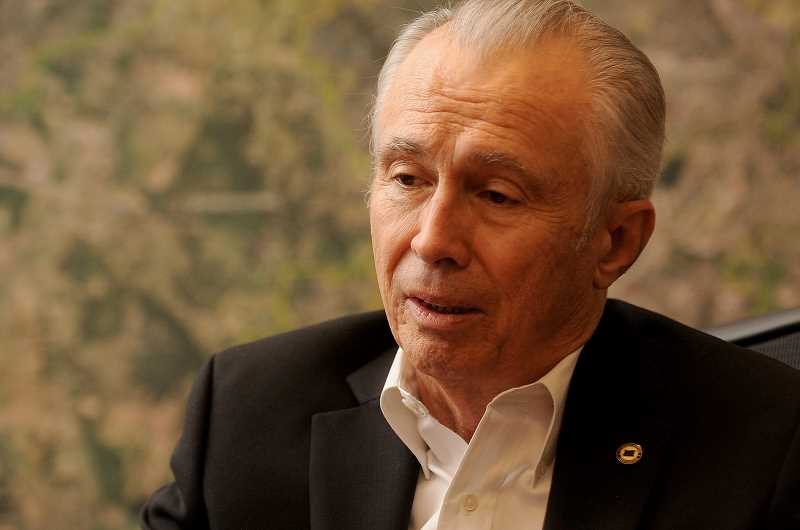 West Linn’s current mayor, John Kovash, is set to retire at the end of February. Accomplishments as mayor include the completion of a new police station, the updating of the city’s infrastructure and the stability of West Linn’s government.

West Linn’s current mayor, John Kovash, announced his resignation Monday, Feb. 9, after a city council meeting. He said that he and his wife, Merle, decided last year that they would move into a retirement community, but with his busy schedule he hasn’t had time for downsizing.

After the city council meeting Kovash unexpectedly walked to the center of the council chambers and grabbed the microphone. “I’m 74 years old,” he said. “it’s time to retire.”

Following the acknowledgment city staff and West Linn’s city councilors for their assistance in his term, Kovash announced that he will serve until the end of the month.

Kovash’s term wasn’t set to expire until Dec. 31, 2016, according to West Linn’s website. He will be resigning as mayor at the end of February.

Concerning a temporary mayor, the city council has not decided whether or not to appoint a new interim mayor or have the city ran by a 4-person council until a formal election in either May or November. However, city charter states that interim mayors are not to be appointed by city council vote until after a formal application process.

Kovash stated that he will serve until the end of the month to assist in transition. He also recommended that for a special election held as soon as May, candidates suitable for the position must be filed no later than March 9.

“I think, provided that the council can allow the public a few weeks notice to decide to run and turn their forms in… they’ll probably put it on the ballot (in May),” Chris Jordan, City Manager said. “If it ended up later than that, the election would have to be in November.”

As of now, the only candidates for the upcoming election are councilmen “Thomas Frank and Russ Axelrod,” Kovash said last Monday.

Kovash has spent his past years as a corporate investment officer and a U.S. Army Colonel until he and his wife moved to West Linn in 1988. Kovash began serving in government in 2003 when he became a member of the Planning Commission. He served there for five years before being elected to city council in 2008.

After the resignation of West Linn’s former mayor, Patti Galle, Kovash was elected a four-year term in 2012.

“I have always been so proud of my grandpa throughout his advancement through the hierarchy of West Linn government,” Olivia Steele, granddaughter and a junior at West Linn, said. “I think that he has handled all the issues with grace, fairness and great thought.”

On Monday, Kovash recounted some accomplishments made during his term as mayor including the stability of the West Linn Government, the completion of a new police station and the updating the city’s infrastructure.

“He decided to retire this year because he wants to be able to focus on the things he adores such as family, golfing and gardening,” Steele said.

Kovash claims his engineering skills have provided a convenient perk in the reconstruction of West Linn’s infrastructure. Some essentials West Linn lacks is the “repair or replacement of about $10,000,000 worth of water pipes 40 or 50 years old,” he said.

“Policies will be determined by the people elected to office. I hope citizens will become involved and know who they are voting for because who gets elected will affect the lives of every person in the city,” Kovash said.