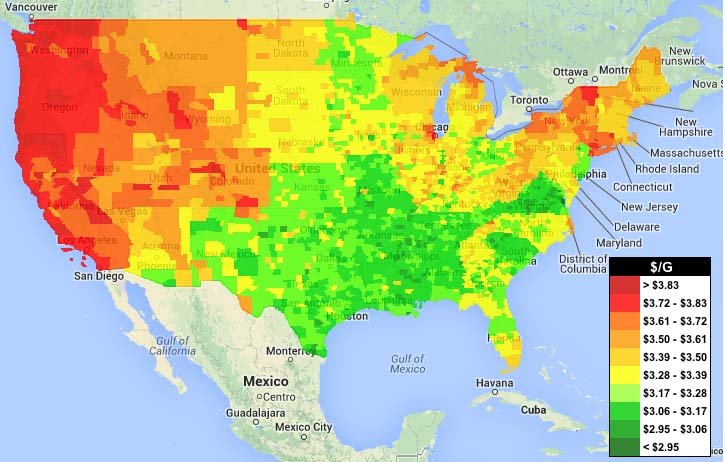 Oregon suffers an economic spike in the Northwest due to recent Californian coastal oil refinery problems and cutbacks.

In the past month Oregon’s average gas prices have climbed more than 70 cents making it the 6th most expensive in the United States after Washington. Tuesday, March 3, the gas prices for regular unleaded was $2.79, 37 cents more than it was a week prior.

In December, the average of regular unleaded was $1.89, the lowest it’s been in six years. Reasons for the increase are complex.

“I’ve noticed the gas prices have been higher,” Jacob Wood, junior, said, “but I didn’t know why until now.”

Wood spends most of his gas money and time driving his friends and family to and from West Linn High School; he also runs errands for his parents. As a student, Wood is not affected by the increasing price. Because he only averages“three to three and half driving hours a week.”

California’s coastal oil refineries, one of the leading oil providers of the West Coast, have been subjected to a variety of problems like labor unrest and disastrous oil fires. Additionally, the Western states have conducted their annual season maintenance, slowing down the means of production in order to prepare for the manufacturing of summer-blend fuel (which was enacted by the Environmental Protection Agency).

The slowed production, paired with the relatively stable demand, creates an increase in price when placed on the market in order to keep up with the supply.

The increases are not limited to Oregon. Washington, Idaho, California, Arizona and Hawaii also suffer from gasoline shortages which has spiked the petroleum markets. According to American Automobile Association of Oregon and Idaho, February experienced the biggest price spike since July, 2013.

At the end February, one of many ExxonMobil refineries in Torrance, Calif. exploded due to oil spills, which factored into the squeezing of petroleum market. On a more national scale, bitter weather in the Northwest and Midwest creates refinery issues, making it more difficult for machinery production to keep up with Western demand.

“Since I’ve moved from the East Coast, anything lower than 3$ has been fine,” Erin O’Malley, French teacher, said. O’Malley, who lives in Portland, spends “about seven hours a week driving” between work and home.

Although Oregon is one of the least impacted states on the West Coast, it has no oil refineries of its own. Because of this, Oregon is extremely vulnerable to its providers which causes drastic changes in the its petroleum economy.

After a comfortable $2 dip back in late 2014, Oregonians have become frustrated with the recent rising market. Some have been affected more than others however. A large portion of the working population has been affected and some have even made cutbacks on driving.

“I haven’t been affected as much,” Mindy Newton, mother and worker, said, “but it creates economic hardship for those already struggling.” Newton works at A&B Towing and spends about nine to ten hours commuting a week, but since then, Newton has restricted her driving ability to the necessities.