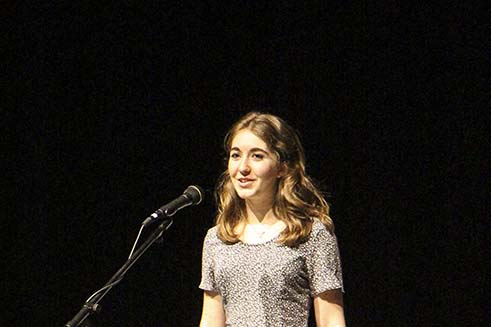 Since winning the school wide Poetry Out Loud competition in Feb. for her poems “Blackberrying” by Sylvia Plath and “A Song in the Front Yard” by Gwendolyn Brooks, Riley Knowles, sophomore, advanced to the top three at Regionals and placed second at State.

To be eligible to compete in Regionals, Knowles had to prepare and perform two poems at Powell’s Books in Beaverton. The first poem had to be under 25 lines and the second poem needed to be a pre-20th Century poem.

Knowles thinks that she performed well at Regionals, despite blanking out on her last poem.

“I was near the end of my poem and I completely forgot it so I kind of just forced words out of my mouth,” Knowles said, “I didn’t know what I was saying but turns out it was right and apparently the audience thought I was about to cough.”

Knowles was surprised by how talented everyone was at the competitions and enjoyed seeing so many people who enjoyed poetry as much as she does. At Regionals the top three performers advance but they are not aware of their rankings.

“Regionals was the first time it really felt like a competition and it was so cool seeing all the different people in the Powell’s setting,” Knowles said.

After placing in the top three at Regionals she advanced to State which was held in at Willamette University in Salem. Knowles says it was beautiful there and she and was able to eat lunch with the girls who won State the previous year.

Knowles was more nervous at Regionals than at the State competition.

“Once we were all at State it was kind of like ‘wow we are all really talented’ so it didn’t feel like it mattered,” Knowles said, “I think that’s part of why it was less stressful.”

Finding her poems to recite, Knowles wanted them to be meaningful.

“I picked my poems because they were important to me and it felt so natural while reciting them,” Knowles said, “it was really crazy to find poems that were so like myself.”

Knowles’ English teacher attended the State Competition. “She was stunning up there. She really was,” Bret Freyer, English teacher, said, “She was so poised, professional and she chose poems that were perfect for her.”

After her performance at State, Knowles found out that she won second place.

“I didn’t expect to place and then I got second and it was really weird,” Knowles said. Knowles actually tied for first place with another girl, but the other competitor beat in her overall performance.

“When I’m really enjoying a poem I feel like I’m just speaking and I love it,” Knowles said, “I’m just so happy I had this opportunity to perform with these great people.”