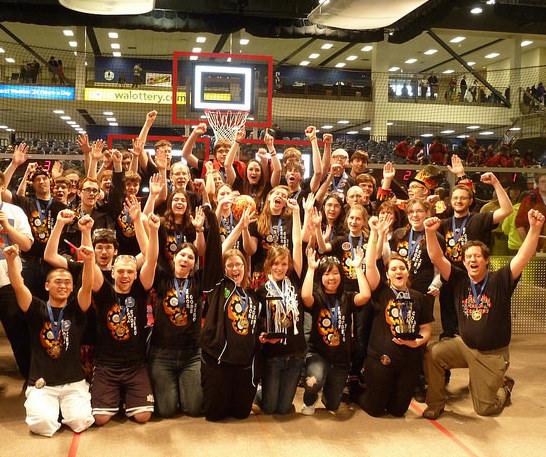 With a three-year consecutive win which advances them to International Robotics, the team members work to maintain their record. After claiming a Gracious Professionalism Award at Regionals, the team headed into the state competition with high hopes.

After winning second place and the Gracious Professionalism Award already this year, the Wilsonville Robotics team added the Creativity Award and advanced to the Pacific Northwest Championship at a regional competition in Auburn, Wash. on March 28.

“We were so pleased,” Beth Hoots, sophomore said. “The Gracious Professionalism Award is a peer-voted award so it was an honor.”

The Wilsonville Robotics team consists of West Linn and Wilsonville High School students. Although more than half of the members are from Wilsonville, most of the leadership positions are assigned to West Linn seniors. Ryan Kelly is the mechanical leader, Tori Bianchi is the administrative leader, and Anna Keil is one of the strategy leaders. Other team members include Nick Dunstan, senior, and  PJ Carr, junior.

“I think it’s pretty cool having West Linn students lead Wilsonville students, but even though we come from two different schools, it hardly makes a difference in the team,” Keil said. “Robotics is all about working together, and they’re like my second family.”

The Wilsonville Robotics team participated in two regional competitions, and won accolades which helped qualified the team for the Pacific Northwest Championship. After they competed in the championship on April 22, they moved on to internationals by landing among the top 31 teams.

“Generally, I think our goal is to get into Worlds, but, personally I’d like my team to be known as a courteous team because we’re known to be a pretty arrogant,” Hoots said.