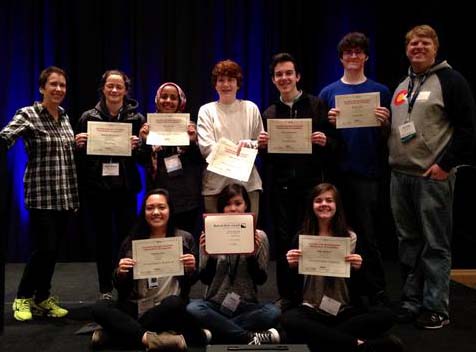 At the National Journalism Convention in Denver, Colo., Brooke McKelvey, freshman, sauntered into a vast ballroom of 100-150 journalism students, editors and editors-in-chief, poised with pens and pads in hand. McKelvey was registered to compete in the News Writing competition, which is among the convention’s most prestigious, according to Glenn Krake, English teacher and Yearbook adviser. The West Linn High School journalism team was informed the next day that McKelvey won an Honorable Mention, and they “went ballistic.”

“She was going up against editors and seniors who are editors-in-chief of their newspaper staffs who have been doing it all their career,” Krake said, “and she wins an Honorable Mention. As a freshman. Unbelievable.”

McKelvey brought home one of eight total awards through competitions like Sports Writing, On-Air Reporting and Broadcast News Writing. In the “Best of Show” competition for yearbook, yearbook staffs submit their most recent book for critique and placement. WLHS’s Green and Gold placed ninth in this competition.

“All eight of the schools that placed above us won this prestigious Pacemaker Award, which goes to the top .1 percent of schools in the nation,” Krake said. “It doesn’t hurt to lose to those schools. Our kids put a lot of effort into our yearbook. It’s just validating we were recognized on a national level.”

The NJC occurred April 16-19, ]is sponsored by the National Scholastic Press Association and is one of the most esteemed national high school journalism competitions, according to Krake. Because many category competitions at the NJC are “a little demoralizing,” less than 900 of the 4,000 students attending participated. For each category, ten Honorable Mentions, four “Excellent” awards and one “Superior” award were the maximum number given. Seven of the eight WLHS students placed in their respective competitions. Below is a list of their distinctions:

The journalism team topped even last year’s performance at the NJC, at which they were awarded five distinctions.

“It’s just a testament to the kind of student we have here,” Krake said. “If you know how to compose yourself and communicate clearly, you can jump into a journalism program, into Yearbook, into Broadcasting and fly.”

The convention also offered attendees three days of seminars about various topics such as photography using a phone, using humor in writing and social media.

“In the competition, I didn’t learn as much,” McKelvey said. “You learn about your topic, but in the sessions you learn to to improve your overall performance. I went to a session about leads, and there were just more details than I would ever think about.”

Krake hopes to take another team of journalism students to Orlando, Fla. in the fall for the next NJC and to Los Angeles, Calif., next spring.