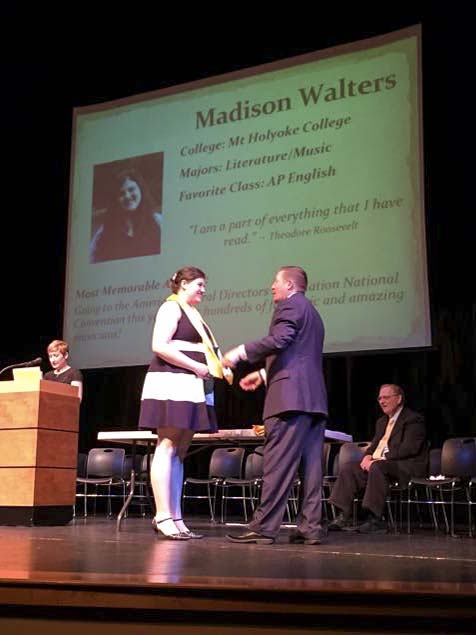 Madison Walters, Class of 2015, receives her honor stole from Lou Bailey, Principal, at the Evening of Excellence which was Thursday, May 28 at 6:30 p.m. in the Performing Arts Center. Graduation took place at the University of Portland Chiles Center.

“The department awards and local scholarships are announced at the event, so it’s a surprise for the students,” Sandi Yamauchi, Student Services Secretary, who has coordinated the event for five years, said. Students attending had the opportunity to receive a complimentary 5×7 photo from Loma Smith Photography.

“As teachers, we are always talking about the amazing work of our students,” Marianna Gordon, Fine Arts teacher, said. “There were two very clear winners this year. They really stand out with their commitment to their work, and their progress in their skills.”

Students who are honor graduates will already know if they received a letter sent to their house from Principal Lou Bailey. According to Yamauchi, the Class of 2015 has a student attending West Point, so that was part of the event as well.

To be included as an Honor Graduate, students must have taken six Advanced Placement classes, completed 12 hours of community service, and have a total weighted grade point average of 3.6