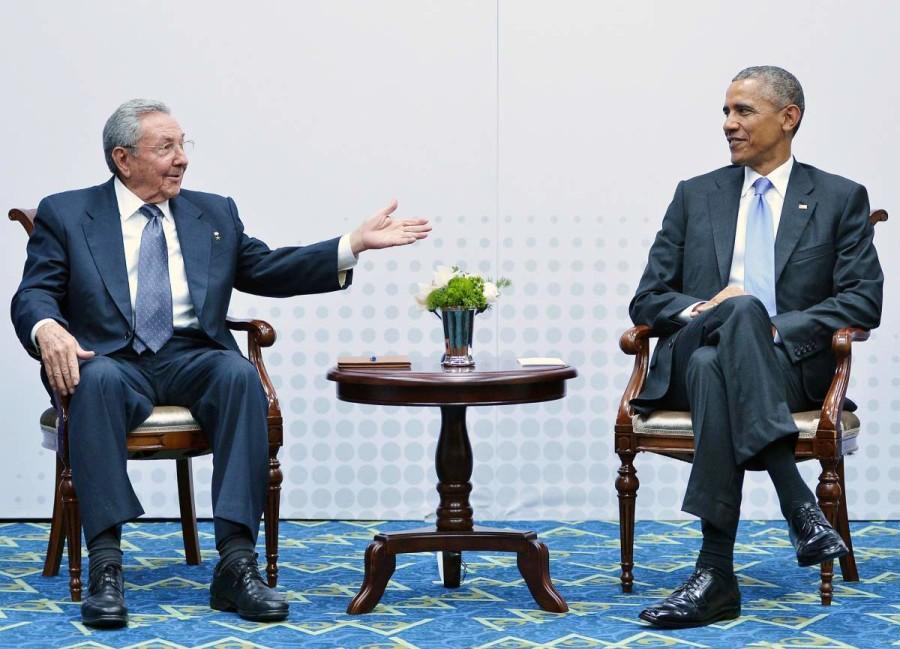 Cuba's President Raul Castro (L) speaks during a meeting with US President Barack Obama on the sidelines of the Summit of the Americas at the ATLAPA Convention center on April 11, 2015 in Panama City. AFP PHOTO/MANDEL NGAN (Photo credit should read MANDEL NGAN/AFP/Getty Images)

Cuba was dropped from the United States terror sponsor list Friday, May 29, in hopes of establishing diplomatic ties after 54 years of isolationist policies. The State Department reviewed Cuba’s place on the list and has determined that its government has not supported nor assisted in the development of terrorist organizations in the last six months. In addition, the nation has made steps to assure the suppression of terrorist organizations in the future.

“While the United States has significant concerns and disagreements with a wide range of Cuba’s policies and actions, these fall outside the criteria relevant to the rescission of a State Sponsor of Terrorism designation,” Jeff Rathke, State Department spokesman, said.

Cuba’s deduction from the list removes one of the biggest diplomatic isolations in U.S. history. This will allow Congress to better American relations with the county in hopes of future trading opportunities.

“Many Republicans in Congress objected to the decision saying Cuba still harbors known terrorists and U.S. fugitives from justice,” Rathke said. “But those issues were not enough to keep Cuba from being removed from the list.”

The biggest change would be the immediate use of American-issued credit and debit cards it the large cities like Havana. American Express and MasterCard have announced that they would help allow their cards to be used on the island, however no American bank has agreed to handle those transactions.

“While big policy differences remain between Washington and Havana, the Cuban government is in no way a supporter of terrorism,” Geoff Thale, director of the Washington Office of Latin America, said.

Politicians opposing the recent decision were quick to take action arguing that Cuba’s president, Raúl Castro, still practices the violation of basic human rights and is engaged in suspicious activity with nations like Venezuela, Iran and North Korea. However, these accusations are not enough for an argument opposing this decision.

While the U.S. Congress still maintains its economic embargo around Cuba, Obama has since provided better economic trade for Cuba with foreign countries. In addition, Obama capitalizes on the idea that he wants to strengthen the connection between U.S. allies rather than complicating them with self interests in hope that other nations will follow.

“Today’s news is further evidence that President Obama seems more interested in capitulating to our adversaries than in confronting them. Iran’s leaders are surely taking note,” Bush said.

Cuba’s president Raúl Castro meets with U.S. President Barack Obama in Washington D.C. to discuss future diplomatic relations. Cuba’s removal from the U.S. List of Terrorism gets rid of one of the biggest obstacles to U.S. relations with Cuba.