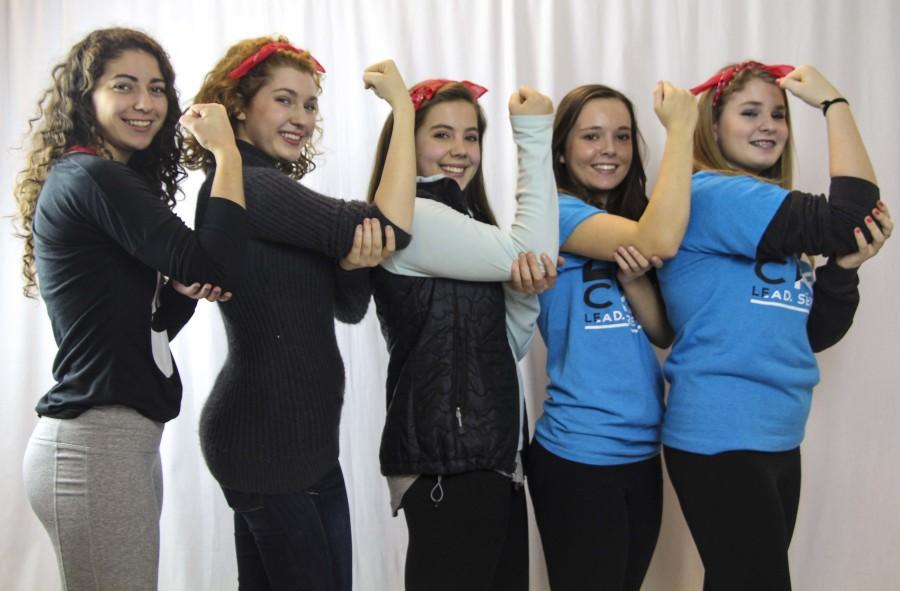 Feminists at WLHS practice their best Rosie the Riveter pose. The new Feminism Club will commence in fall of 2015 to talk about feminist issues as well as contribute to the community.

With the countless stories in the media surrounding the LGBT community and gender equality all over the world, students at WLHS have decided to step in and create an informational and open environment to discuss feminist issues of their own.

With 75 members and growing, the WLHS Feminist Club is banding together before the start of the 2015-2016 school year. After creating a group on Facebook to share thoughts and current events within our culture, Morgan Middleton, junior, decided to make a platform to speak about pressing LGBTQIA (lesbian, gay, bisexual, transgender, questioning, intersex and asexual) issues and feminism as a whole.

“Feminism to me is justice,” Middleton said. “It’s about respecting everyone’s choices as well as spreading love and acceptance.”

Kaylor MacLaughlin, junior, hopes people will learn that gender equality isn’t just a fight for women, but for men too. The group leaders hope that males will not be intimidated to join.

“[Feminism] means believing that my gender doesn’t make me insufficient or inadequate,” MacLaughlin said. “It means making sure that other women and men know that gender stereotypes don’t have to define them.”

The goal of the club is to not only spread awareness, but to contribute to the West Linn community and beyond.

“I hope the club participates in outreach to share our message and to help others that are affected by gender discrimination,” MacLaughlin said.

The club hopes to band together by hosting fundraisers and donating the proceeds to shelters for battered women and LGBTQIA organizations.

While most operations, like finding an adviser for the club will not be underway until next fall, members are excited about the proclaimed feminist community arising at WLHS.

“I hope that [the club] provides an open forum for feminists to debate, consult and support each other.”