Learn About the Newest WLHS Clubs. 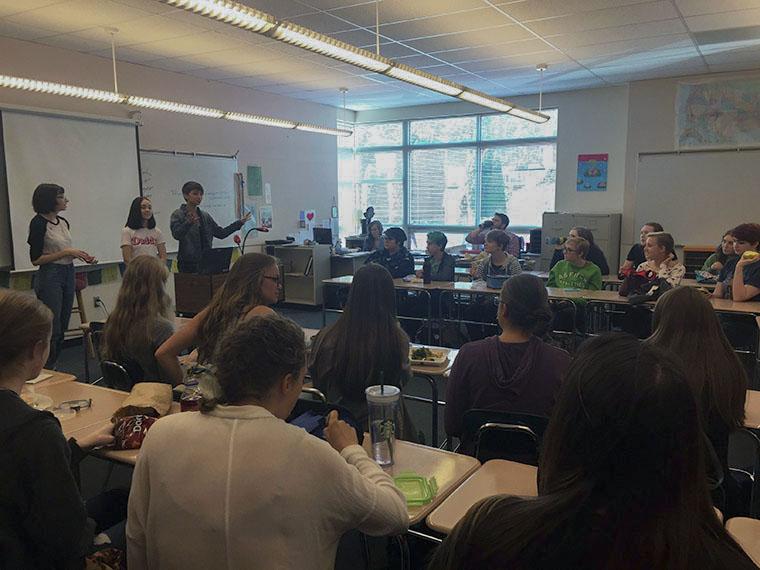 Presidents of the Feminists Club Brianna Papish, Dana Tenoso and Morgan Middleton, hold their first meeting Wednesday, during lunch, in room E104. The club members said their introductions and discussed the agenda.

Walking around the school, posters can be seen advertising clubs on hallway walls and pillars. These clubs can range from fanclubs to career clubs, and there are numerous clubs waiting to be kick-started. WLHS clubs are a way to get involved with the school and with peers.

A new unknown club referred to as the Future Doctor’s Club is targeted for students who are considering a medical career path. Maddie Davis, senior, is the founder of this new club. Other students are Davis’ motivation as she puts, “I want to be in the medical field, and I know a lot of kids do too.”

During club meetings there will be discussions on career paths, college possibilities, medical videos, and trips to health centers on weekends. The club focuses on the experience; a taste of what being a doctor or nurse is really like.

“I wanted to start this club for other kids like me that have the same interest,” Davis said. “I hope the club will keep going after I graduate from WLHS.”

Brianna Papish, senior, is one of the three presidents of the Feminists Club. This club recognizes gender equality, along with many other topics.

“It’s inclusive for everyone and everything”, Papish said. Their mission statement reads, Gender equality, Safe Space LGBTQIA, Disabled, and Racial Equality. During Wednesday meetings in Mr. Mooney’s room, the group will make informational posters, and create fundraisers for awareness.

“It’s a big thing for me,” Papish said. “That’s just how I was raised, to be accepting.” All three presidents of the Feminists club were inspired to make this club a reality after seeing issues firsthand and dealing with it on a day to day bases.

Although it is not a new club this year, the Tabletop Gaming Club is one of the newer ones to the school. Julien Comardelle, junior, and friends found an opportunity to create this club with funding from the school administration.

Given this opportunity, it was created for students interested in coming together twice a week to play their favorite table games. Their games can last weeks to months, depending on the interest level and the game itself. “We have a lot of people with different interest,” Comardelle said. “It’s an experience.”

All new clubs are looking forward to creating opportunities for students – whether it’s through a career path, social justice, or common interests, their goal is to educate themselves and their peers, as well as to become involved with the school.